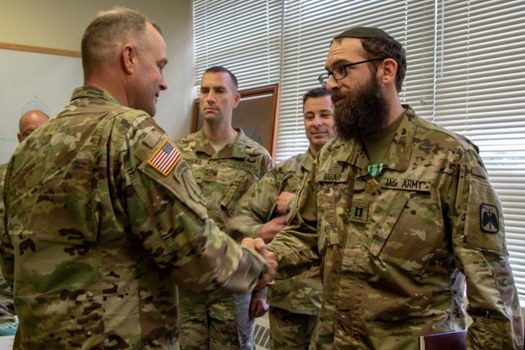 A Lubavitcher U.S. Army Chaplain is being commended for his actions that led to saving the life of a distraught army veteran. Captain Michael Harari, who was off duty, observed the man about to do himself harm and jumped into action, speaking to the man and convincing him to come back.

The 1-229th Attack Reconnaissance Battalion’s chaplain found himself directly involved in one such situation, though the individual needing his assistance was a civilian and the chaplain was off-duty.

“It was 1300 [1 p.m.] this past Sunday [August 26, 2018], I was driving a friend to the airport,” said Ch. (Capt.) Michael Harari, a Jewish Rabbi with the battalion. “When we got near the 56th Street overpass, I saw an individual on the other side of the guard rail. He was reaching out to the other side just above traffic.”

Harari saw the man standing close to the edge of an overpass and quickly made a decision to turn around and assist.

“I told my friend to call 911,” said Harari. “I took the next exit and back-tracked to get to where that person was.”

In short order, the chaplain located the man.

“Come over here,” said Harari. He asked the man to step over the rail and get close to him so he could speak to him, he explained.

During their conversation, the man shared that he was a veteran.

“Hey, you know I’m a chaplain over at JBLM,” mentioned Harari to the man, seizing the opportunity to connect with the stranger.

Harari provided him reason and understanding. He continued to keep the veteran occupied with their conversation while waiting for the police, he added.

“He was talking about his service; he wasn’t so coherent,” said Harari. “As we’re talking back and forth, it felt good that he was further away from the edge and that physically I would be able to restrain him if I needed to. But it didn’t come to that.”

It is normal for Harari to look for indicators of a potential suicide. In this case, without hesitation, he knew he needed to be there for the person.

“It feels humbling that God would use me for things of such importance,” said Harari. “It makes me feel that I am doing what I’m supposed to and my eyes are looking out.”

It was no coincidence to Harari. He believed that he was in that position for a purpose. In the same breath, he mentioned how his peers would react in the same way.

“As a chaplain, we believe that God puts us in places for a reason,” he commented. “Any of my peers would have done the exact same.”
Even though his actions occurred during off-duty hours, he received recognition. Harari downplayed the feat, but others saw it differently.

“His care for his fellow man goes well beyond his responsibilities of the Army,” remarked Lt. Col. John B. Davis III, 1-229th ARB commander. “His small amount of compassion saved that man’s life.”

“We all have to look out for each other…not only here on-post but also off-post,” said Harari. “We have to be everyone’s battle buddy.”
As a chaplain, Harari plays a vital role in the success of a healthy unit’s morale and welfare.

“He also commits his free time to his family, unit, and the JBLM community as the only chaplain on-post of the Jewish faith,” noted Davis. “He is an integral part of the spiritual health of our unit.”

“I provide the Sabbath services every week,” added Harari. He also have the Jewish High Holidays schedule for JBLM, as well as providing the services for the Battalion while at Yakima Training Center conducting field training exercises.