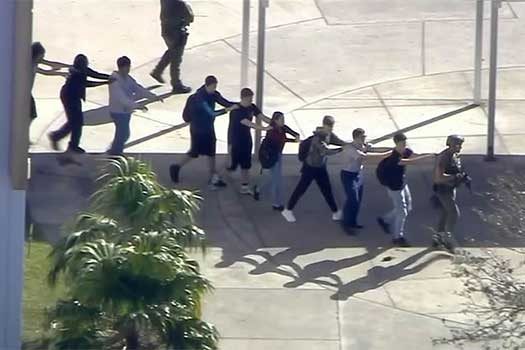 At least 17 people were killed, including students and adults, and many others injured when a former student opened fire in a high school in Parkland, Fla. Victims were taken to local hospitals, and three remain in critical condition.

Nikolas Cruz, 19, was taken into custody by police in nearby Coral Springs, Fla., about an hour after the assault at the Marjory Stoneman Douglas High School. He had previously been expelled from the school, and on Wednesday, was heavily armed.

During an afternoon of terror, hundreds of students were evacuated from the scene as police surrounded the area.

“It was a wrenching scene,” Rabbi Mendy Gutnick, youth director at Chabad of Parkland, told Chabad.org. “Parents were gathered outside while their children were still inside of the school, and they had no way to save them.”

“Together with Rabbi Shuey Biston, I rushed to the school to give support to anyone we could. The school is at least 40 percent Jewish, so we know many of the students and their parents,” he continued. “We went from parent to parent and tried to offer as much comfort as possible, and helped them recite Psalms, praying for the students and faculty in the school.”

Gutnick said he is coordinating with fellow Chabad rabbis from nearby Coral Springs, home of many of the students, to hold an evening of prayer, consolation and a memorial later this week.