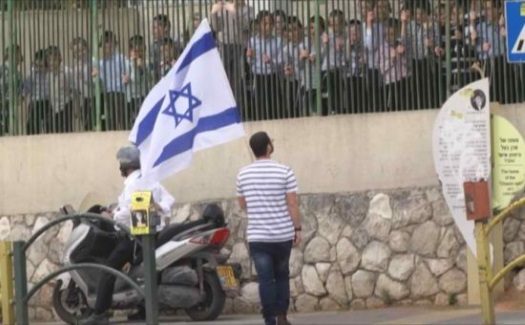 Two employees of an Israeli television channel have been fired after posting a staged video to Facebook that supposedly showed Charedi residents of Bnei Brak attacking a news reporter carrying an Israeli flag.

Four different witnesses said that after Hochman and his cameraman wandered through the Satmar neighborhood for half an hour without incident, they positioned themselves near Satmar shtiebels where they were ignored by those inside, even after they offered a loud rendition of the Israeli national anthem, Hatikvah.

Undaunted, Hochman reportedly tried another approach, asking a Chasidic friend of his on a motorcycle to stage an attack.  According to eyewitnesses, it was clear that Hochman knew the man he was speaking with.

“The two of them hugged and spoke for several minutes,” said one person who observed the exchange.

The Chasidic biker returned, snatching the flag from Hochman’s hands, before breaking it and screaming at Hochman.  After leaving the scene, the motorcyclist returned once again, earning compliments from Hochman for his performance.

Activisit Shmulik Weinreich, one of those who witnessed the “attack,” said that he heard the man on the motorcycle ask Hochman “how did it come out?”

The biker later confessed that he had grabbed the flag as a favor to a Hochman, who told him he was filming a satirical video.

In the video, which was ultimately released to Reshet 2’s Facebook page, Hochman said that he had been spit on by locals, who also threw eggs at him, leaving him to fearing for his life.

After seeing the video, the motorcyclist said that he regretted taking part in the stunt.

“Had I thought about it, I would have understood that he was taking advantage of me to try to embarrass the people in the neighborhood,” said the motorcyclist.

Reshet 2 chose to terminate both Hochman and his video producer on Sunday, in addition to issuing a formal apology to the public.

“Reshet is taking this matter very seriously and working hard to prevent incidents of this nature in the future.  Whether this incident took place through human error or any other kind of mistake, everyone involved expresses their sincerest remorse.”