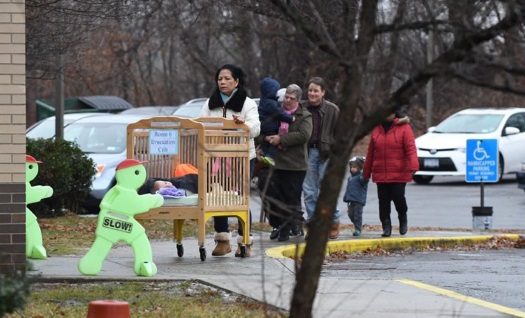 For more than a month, dozens of bomb threats have been called into JCCs and other Jewish institutions around the country. We’ve witnessed the overturning of tombstones in Jewish cemeteries along with other anti-Semitic acts and threats. It’s always good for parents and their kids to sit down for a discussion of the events of the day; so renowned author and educator Rabbi Tzvi Freeman compiled a list of five points to cover.

from Chabad.org by Tzvi Freeman

1. Discuss the primary goal of terrorism: To instill fear.

A.k.a. psychological warfare. Just one goal: Create an atmosphere of dread, panic and fright. Achieve that and they’ve won. Which means that if you aren’t dreading, panicking and frightened, you’ve won.

Which is what you are planning to do. You are planning to demonstrate that Jews don’t get up and run every time some anti-Semite says “boo.” You’re going to continue life normally, to act as if the people who are making those calls don’t exist (other than the slight inconvenience of evacuating a building when the alarm goes off or otherwise doing what the authorities tell you because it’s better to be on the safe side, which is why those procedures are in place).

That alone is the greatest retribution.

2. Talk about the history of anti-Semitism.

You can go backwards in history, from terrorism in Israel and Europe to the BDS movement and other forms of contemporary anti-Semitism, to the job discrimination your parents or grandparents faced when they arrived in America, to the Holocaust, to the immigration quota system that considered Jews inferior, and then to pogroms, Cossacks, Spanish Inquisition, Crusader massacres, the Persians, the Romans, the Greeks . . . all the way back to Ancient Egypt.

Which provides you a great segue to ask: “How did we survive all that? Because, hey, this is nothing new. They’ve been trying to blow us up for 3,500 years!”

And then you can note that you figure that Jews made it through because they refused to be afraid, because they held on tight to their Jewishness despite all odds, doing even more mitzvahs, learning even more Torah and other good stuff, including hanging out at the local JCC.

That’s when you can tell them about your campaign to get mezuzahs up on all the doors of the JCC. And you won’t stop there. Work on getting them up at people’s offices, front doors of homes. Look, someone has to take the initiative. And you’re not going to wait for someone else. That’s part of being Jewish—taking on the responsibility to do whatever needs to be done to make the world a better place.

3. Ask the question: Who do you think is behind all this?

Get into the theories behind this spate of bomb threats. They’re obviously methodical and cunningly crafted. Yet it could all be the machinations of one tech-savvy deranged maniac.

Whoever it is, what’s important is that if one person—or small group of people—is capable of spreading so much terror in so little time with just a few phone calls, imagine how much good, beauty and love all of us can spread if we just put ourselves to it. Which leads us to . . .

If you are a boomer from the Sixties, I’ll bet that sings for you. OK, maybe for your parents. If not, you can still get into this anomaly of anti-Semitism and terrorism.

Unlike other forms of warfare, you can’t fight it in kind. You can only do its opposite. This is known as paradoxical intervention. You go out there and show people that we care about everyone. You act like a mentsch. You show solidarity and love for your fellow Jew, along with respect and love for all human beings, and all G‑d’s creatures.

Ask any psychologist: When faced with fear, we all need to do something to deal with it. Jews have plenty of ways. We come together. We pray. We eat food together. We put up mezuzahs and check the ones we have. Then we eat more food together.

Mezuzahs are a great start because that’s a connection we have between our homes, our places of work—and even our JCCs—with the Master of the Universe.

After all, the real reason we have survived is just because He wants us here. So He protects us. But the connecting point of that protection is that little handwritten scroll rolled up and affixed to the doorpost.

When a Jew walks past that mezuzah, child or adult, he or she feels protected. And we are. The terrorist, in the meantime, feels befuddled. Here he was doing all he could to destroy us and instead we’re coming alive, putting up visible signs of our connection to the Master of the Universe and His protection on our doorposts. Foiled again!

More information on mezuzahs can be found on Chabad.org.