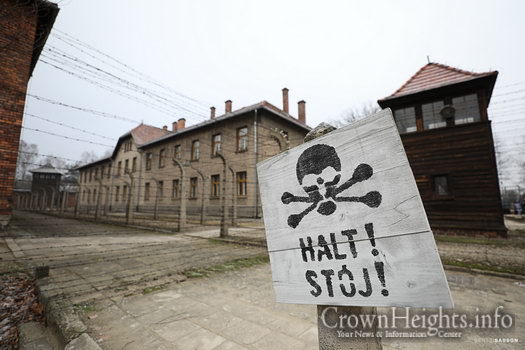 The White House has faced widespread criticism since Friday, when it issued a statement in honor of International Holocaust Remembrance Day that omitted mention of the Jewish genocide.

Australian-Israeli Jewish leader Isi Leibler said he was “deeply disappointed” in the new president for “failing to relate to Jews in his Holocaust statement.”

However, he told The Algemeiner, “I don’t believe it was a conspiracy, but rather due to incompetence born out of the chaos of an inexperienced administration trying to get its bearings.”

“I would have expected responsible Jewish leaders to get him to rectify the situation rather than confront him,” Leibler added.

He was referring, among others, to Anti-Defamation League CEO Jonathan Greenblatt, who tweeted on Friday that President Donald Trump’s statement was “puzzling and troubling” because it refers to “depravity and horror” inflicted on “innocent people” by the Nazis and fails to mention that the victims were Jews.

First, you can compare this statement to how the Soviets spoke about the Holocaust. They always mentioned “innocent Soviet citizens,” never Jews, so that people who collaborated in the murder of the Jews were off the hook, and the specific nature of the Nazi genocide was obfuscated. Second, that America’s greatest sin again the Jews was not what happened during the war, when Americans died fighting the Germans, but before the war, when the US would not admit Jewish refugees, and even sent back an entire ship to the Germans. [Chief Strategist and Senior Counselor to the President] Steve Bannon apparently said in an interview that he was a Leninist and wanted to “tear this country down.” And Trump has a strange liking to [Russian President Vladimir] Putin. Put this statement in the context of these facts, and you will be able to see the nasty underbelly of this administration.

US Sen. Tim Kaine (D-VA), Democratic presidential nominee Hillary Clinton’s running mate went further on Sunday, calling Trump’s statement “Holocaust denial” and linking it to the executive order the president signed the same day on vetting visitors to the US from Muslim countries.

We have to remember this. This is what Holocaust denial is. It’s either to deny that it happened or many Holocaust deniers acknowledge oh, yeah, people were killed and it was a lot of innocent people, Jews weren’t targeted and the fact that they did that and imposed this religious test on Muslims in the executive orders on the same day is not a coincidence.

Leibler called all such accusations against Trump for antisemitism or Holocaust denial “utter nonsense.”

Also on “Meet the Press,” White House Chief of Staff Reince Priebus asserted, “There was no harm or ill will or offense intended by any of that. I mean, everyone’s suffering in the Holocaust — including obviously all of the Jewish people affected, and the miserable genocide that occurred — is something that we consider to be extraordinarily sad and something that can never be forgotten.”

Zionist Organization of America President Mort Klein reacted harshly: “As a child of Holocaust survivors, I and ZOA are compelled to express our chagrin and deep pain at [the] Holocaust Remembrance Day Message, omitting any mention of antisemitism and the six million Jews who were targeted and murdered by the German Nazi regime and others. ZOA hopes that president Trump will direct his staff and COS Reince Priebus to immediately rectify this painful omission.”

In a statement to Politico, Republican Jewish Coalition spokesman Fred Brown said, “The lack of a direct statement about the suffering of the Jewish people during the Holocaust was an unfortunate omission. History unambiguously shows the purpose of the Nazis’ final solution was the extermination of the Jews of Europe. We hope, going forward, he conveys those feelings when speaking about the Holocaust.”

As a member of a family that lost over 150 souls during the Shoah, I thought the president’s statement on Holocaust Remembrance Day was inclusive and sensitive. That the Jewish People was not specifically mentioned struck me as unusual, but given the president’s extremely close ties to the Jewish People, including within his own immediate family, and his history of supporting and contributing to Jewish causes, it would be a mistake to impute anything but the most noble motives to him in framing the White House statement.

World Jewish Congress President Ronald S. Lauder also defended the Trump statement, saying, “It does no honor to the millions of Jews murdered in the Holocaust to play politics with their memory. Any fair reading of the White House statement on International Holocaust Remembrance Day will see it appropriately commemorates the suffering and the heroism that mark that dark chapter in modern history. There are enough real antisemitism and true threats facing the Jewish people today. Our community gains nothing if we reach a point where manufactured outrages reduce public sensitivity to the real dangers we confront.”

The statement in question read as follows:

It is with a heavy heart and somber mind that we remember and honor the victims, survivors, heroes of the Holocaust. It is impossible to fully fathom the depravity and horror inflicted on innocent people by Nazi terror. Yet, we know that in the darkest hours of humanity, light shines the brightest.‎ As we remember those who died, we are deeply grateful to those who risked their lives to save the innocent. In the name of the perished, I pledge to do everything in my power throughout my Presidency, and my life, to ensure that the forces of evil never again defeat the powers of good. Together, we will make love and tolerance prevalent throughout the world.

When asked by CNN why the White House failed to mention the genocide of the six million Jews, an administration spokeswoman, Hope Hicks, defended the statement.

“Despite what the media reports, we are an incredibly inclusive group and we took into account all of those who suffered,” she said, sending an email to CNN with a link to a Huffington Post UK article listing the other groups who were targeted and killed by the Nazis, including “priests, gypsies, people with mental or physical disabilities, communists, trade unionists, Jehovah’s Witnesses, anarchists, Poles and other Slavic peoples, and resistance fighters.”

As The Algemeiner reported in January 2016, the official statement released by Canadian Prime Minister Justin Trudeau ahead of International Holocaust Remembrance Day last year caused a storm on social media for its omission of the mention of Jews. Trudeau had assumed office two and a half months prior to the incident.