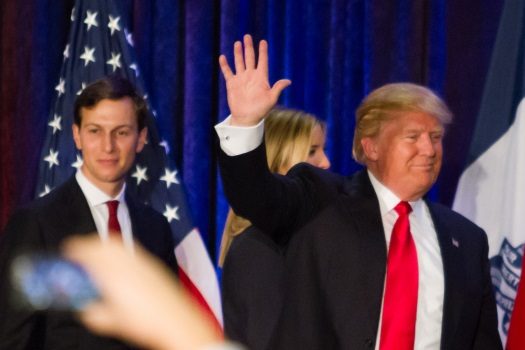 It was “not a coincidence” that new President Donald Trump’s media troubles surged last Saturday — when his Orthodox Jewish son-in-law and senior adviser Jared Kushner was observing Shabbat — a source close to the Trump family told Vanity Fair in an article published on Tuesday.

“He wasn’t rolling calls on Saturday when this happened,” the source was quoted as saying, referring to the 36-year-old Kushner’s activities the day after Trump’s inauguration, when the president and his press secretary got into a tiff with the media about the size of the crowds at the previous day’s events in the nation’s capital.

The effect of Kushner’s Shabbat observance on his father-in-law’s behavior has been noted before. A Huffington Post profile of Kushner’s wife Ivanka Trump published in September cited a friend of the couple as saying that the then-presidential candidate’s “worst tweets” during the election campaign happened when his daughter and son-in-law were “off the grid observing the Sabbath or another Jewish holiday.”

“It could be a big problem if the people who make our president not crazy aren’t available one day a week,” the friend said.

However, as reported by the New York Times, Kushner did go to Trump Tower in Manhattan on a Saturday in early October to consult with his father-in-law just after the scandal broke over the publication of the “Access Hollywood” tape on which Trump was heard making lewd comments about women.

Among the other tasks Kushner will be assigned in the coming years, Trump has said he will be given the mission of brokering an Israeli-Palestinian peace agreement.

“If you can’t produce peace in the Middle East, nobody can,” Trump told Kushner at a pre-inauguration event in Washington, DC last week. “All my life I’ve been hearing that’s the toughest deal in the world to make. And I’ve seen it, but I have a feeling that Jared is going to do a great job.”