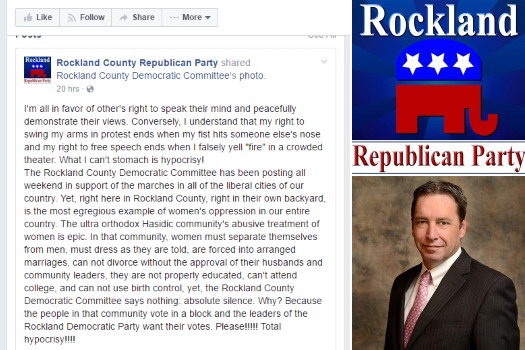 In a shocking post on their official Facebook page that is reminiscent of a medieval blood libel, the Rockland County Republican Party unleashed a tirade of venomous and outrageous lies against the Hasidic community, alleging that Hasidic women are held captive, abused and denied basic human rights by their male counterparts.

The Rockland County Republican Party is lead by Chairman Lawrence Garvey, who was elected to the post in 2014.

The following is the full text of the post, which can be viewed and commented on here:

I’m all in favor of other’s right to speak their mind and peacefully demonstrate their views. Conversely, I understand that my right to swing my arms in protest ends when my fist hits someone else’s nose and my right to free speech ends when I falsely yell “fire” in a crowded theater. What I can’t stomach is hypocrisy!

The Rockland County Democratic Committee has been posting all weekend in support of the marches in all of the liberal cities of our country. Yet, right here in Rockland County, right in their own backyard, is the most egregious example of women’s oppression in our entire country. The ultra orthodox Hasidic community’s abusive treatment of women is epic. In that community, women must separate themselves from men, must dress as they are told, are forced into arranged marriages, can not divorce without the approval of their husbands and community leaders, they are not properly educated, can’t attend college, and can not use birth control, yet, the Rockland County Democratic Committee says nothing: absolute silence. Why? Because the people in that community vote in a block and the leaders of the Rockland Democratic Party want their votes. Please!!!!! Total hypocrisy!!!! 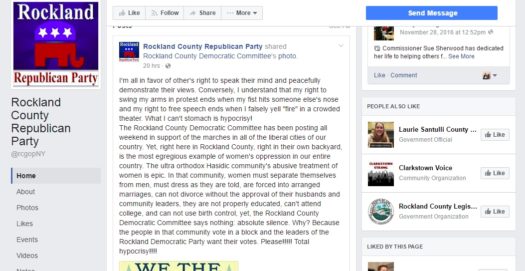