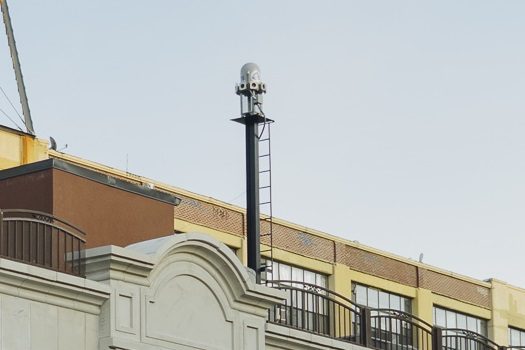 Amid ringing church bells and Muslim calls to prayer, New York City saw fit to fine an Orthodox-Jewish synagogue in Williamsburg for the once-a-week siren heralding the arrival of Shabbos.

A pre-Shabbos siren atop a Bedford-Stuyvestant synagogue has been raising alarm bells of another sort as neighbors have been complaining of blasts that far exceed the city’s noise control code.

The siren in question was mounted atop the Bais Yaakov Nechemia synagogue on Myrtle Avenue after a recent expansion.  Neighbors at an adjacent six story apartment building at 144 Spencer Street have complained that the horn, located on the roof of the three story structure, is right outside their windows.

“It leaves me with a ringing in my ears and headaches that have continued for two days,” resident Aaron Graubart told the Gothamist blog.  “I work from home and I now have to be out of my apartment on Fridays in order to avoid the sound. The siren is literally forcing me out of my home on Friday afternoons.”

Residents of 144 Spencer Street say they have measured the siren’s decibel level at 106, which is more than double the city’s legal limit and that they have made numerous calls to 311 to report the noise.

“All the calls amounted to the same thing,” said resident Robert Prichard.  “I’d get an answer back that the police assessed the situation and felt no action was needed.”

Prichard fared slightly better with the city’s Department of Environmental Protection. Two sound readings taken by the agency in August outside the synagogue measured in the 90 degree range while indoor sound measurements taken in Graubart’s apartment exceeded 100 decibels, a level roughly equivalent to that of a passing train passing or a jackhammer, according to a noise code pamphlet distributed by the DEP.

Warnings issued to the synagogue by the DEP resulted in a single week’s silence from the siren, but full volume blasts resumed the following Friday afternoon, said Prichard.  Donning a jacket, black pants, a white shirt and a yarmulka, Prichard approached the synagogue’s rabbi directly to discuss the problem and was told that any decision to lower the volume had to come from the Satmar Rebbe.

Rabbi David Niederman of the United Jewish Organizations of Williamsburg said that the synagogue was ticketed for its siren, which sounds twice for 90 seconds on Friday before the start of Shabbos.  Rabbi Niederman noted that New York City Local Law 113 specifically states that “organs, bells, chimes or other similar instruments” that are used “from on or within any church, synagogue, mosque or other house of worship” are exempted from local noise ordinances.

Rabbi Niederman said a hearing on the matter is scheduled for next month and he hopes to be able to reach a compromise that will be acceptable both to the neighbors and to the synagogue as soon as possible.

“We are ready to turn down the volume or to shorten the sirens to provide the least disturbance but unfortunately our efforts so far to work with that neighbor have fallen on deaf ears,” said Rabbi Niederman.  “We look forward to working with the city, with the neighbors and with the community board if they want to get involved and work out an amicable solution.”

Assemlyman Joseph Lentol said that he is unaware of any calls to his office from constituents who are bothered by the Shabbos siren.

“We have not received any complaints on this issue,” said Lentol.  “However, as we do with all complaints from constituents, we explore various avenues to help in mitigating the problem. This can range from working with city agencies to reaching out directly to the involved stakeholders.”

Bais Yaakov Nechemia is not the first Jewish institution to find itself at the center of a Shabbos siren controversy.

According to The Daily News, Yeshiva Toras Emes in Midwood was slapped with five noise code violations a dozen years ago for a weekly Shabbos siren.  Lawyers for the school argued that religious organizations are exempt from city noise regulations but the yeshiva ultimately agreed to lower the decibel level on the siren which, according to The New York Times, has a sound radius of two miles.  Sentry Siren, the manufacturer of the 40V2T siren that is mounted atop the yeshiva, boasts that it is the largest omni-directional siren currently in production.

The use of a high volume sound for religious purposes is not unique to Judaism.

“The churches have bells. Jews have horns. And we have call to prayer,” Assistant Imam Osman Adam of the Masjid At-Taqwa mosque told the Bed-Stuy Patch.  The mosque is located just one mile away from Bais Yaakov Nechemia.

The Muslim call to prayer known as the hazan can sometimes come as early as 5:25 AM and is repeated four more times throughout the day.

“I’ll be doing something and I’ll get a heart attack when it comes on the speakers,” said Fidel Elmashi, who sells toys and novelties across the Fulton Street mosque.

In East New York, 156 noise complaints were filed against the Masjid Al-Aman mosque, whose hazan can be heard for a 20 block radius.

Kobir Chowdhury, a member of the mosque, said that the five daily calls to prayer between sunrise and sunset are a necessity for Muslims and described the sound as “melodious.”

“It is a very, very soothing sound,” Chowdhury told Gothamist.  “It doesn’t disturb anybody if you listen to it and if you know the meaning of it.”

For East New York resident Jennifer Pinto, the hazan is anything but tranquil.

“They have to have some consideration for us,” said Pinto. “It’s too noisy.  Too, too noisy.  You don’t get used to it because you have no idea when it’s going to happen.”

Pinto advocated for the volume to be lowered for the calls to prayer.

Ultimately, Masjid Al-Aman turned down the volume at the DEP’s request. The DEP elected not to fine the mosque because of the relatively short duration of each hazan.

Church bells have also received their share of complaints, with one Brooklyn man launching a campaign of his own against the St. Thomas Aquinas church in Marine Park.

John Russo collected signatures from 58 neighbors asking the church to lower the volume of the church bells which ring daily, every hour on the hour from 9 AM to 7 PM.

According to Russo, the bells are so loud they drown out conversation.  The former window display designer at Macy’s used his artistic talents to decorate his lawn with a variety of hand painted signs expressing his frustration.

“I’m sure to go to heaven. Did my time in hell with the bells,” read one sign.