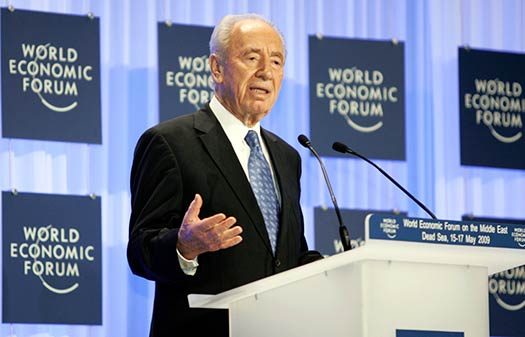 Shimon Peres, a longtime politician and dubbed one of the State of Israel’s founding fathers, has passed away Tuesday evening while surrounded by family at the age of 93.

Israel’s ninth President and former Prime Minister Shimon Peres has passed away at the age of 93, two weeks after suffering a serious stroke and being admitted to the Tel Hashomer Hospital.

His condition deteriorated on Tuesday and family and friends were summoned to the hospital to say their farewell.

Peres served as the Prime Minister of Israel twice and twice as Interim Prime Minister, and was a member of 12 cabinets over a period of 66 years.

Prime Minister Binyamin Netanyahu honored the late president in a statement Wednesday morning, calling him “one of our great leaders,” and “one of the founding fathers of the State of Israel.”

“His name will be forever engraved in the story of the rebirth of the Jewish people.”

Peres was first elected to the Knesset in November of 1959 and, except for a three-month-long hiatus in early 2006, served continuously until 2007, when he became President.

He was the longest serving chairman of the Labor party, from 1977 until 1992. While serving as a member of Labor for the majority of his time in the Knesset, in 2005 he left Labor to support Ariel Sharon and his new Kadima party.

Following Kadima’s win in the 2006 election, Peres was given the role of Vice Prime Minister and Minister for the Development of the Negev, Galilee and Regional Economy, serving under Prime Minister Ehud Olmert.

Peres was elected President of the State of Israel by the Knesset on June 13, 2007, and resigned from his role as a Member of the Knesset the same day. Peres was sworn in as President a month later, on July 15, 2007.

He announced in April 2013 that he would not seek to extend his tenure beyond 2014 and was succeeded by Reuven Rivlin in July of that year.

Peres served as Foreign Minister in the second government of Yitzhak Rabin and was among the architects of the Oslo Accords, for which he won the Nobel Peace Prize in 1994.

He is credited with the establishment of the Dimona reactor site and with Israel’s ambiguity policy on the subject. Defending the reactor, he once said: “We’re the only nation in the world whose existence is under threat, and we’re the only nation in the world who is not a threat to anyone. We needed to find a solution to that problem. I have no doubt the reactor gave Israel a dimension of deterrence. For me, Dimona was the first step to Oslo. It was built so we’ll have the possibility to make peace.”

He was born Szymon Perski, on August 2 1923, in Wiszniew, Poland (now Vishnyeva, Belarus), to Yitzhak and Sara Perski. His father was a wealthy timber merchant, later branching out into other commodities. His mother was a librarian. Peres’ grandfather, Rabbi Zvi Meltzer who was murdered in the Holocaust, had a great impact on his life.

This past January, Peres was admitted to the Tel Hashomer Hospital after he suffered a mild heart attack.

Last month, Peres suffered from chest pains and his son-in-law, Dr. Rafi Walden, was called to his home in Tel Aviv. Tests showed that Peres had suffered from atrial fibrillation of the heart. A senior cardiologist treated the former President at the time until his heart rate returned to normal and he was not admitted to hospital.

A week before his hospitalization, the former President underwent an operation to have a pacemaker device implanted to prevent irregular heartbeats. The operation took place just after he returned to Israel following a political conference in Italy.

Sources close to the former President said at the time that Peres’ physicians had advised him to get the pacemaker device to prevent heart disorders.