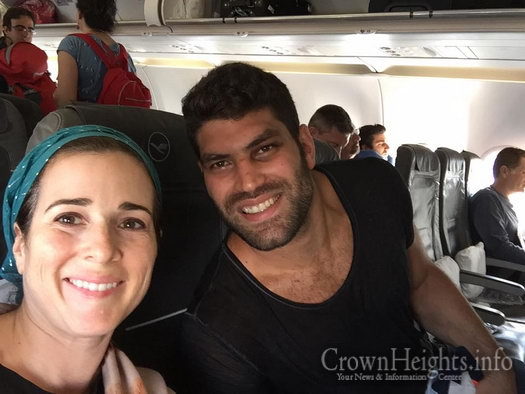 After boarding a plane to travel to Israel, Hindel Swerdlov, whose husband Yossi is Associate Director the Chabad Terror Victims Project, was pleasantly surprised to see who sat down next to her for the flight – the Israeli Olympic Judo winner whose hand would not be shaken by his Egyptian opponent. What ensued was a meaningful conversation about family, Israel. Chabad and the Rebbe that developed into a lasting friendship.

I’m on the plane, catching my second leg of the flight from LA back to Israel. Living in Israel for 19 years, I was on one of many visits to family back home. Dad isn’t feeling well and I had the privilege to hang out with him for five days. Shlomo Yitzchok Ben Esther fayga. As one of 12, it’s a huge deal to get alone time with him and I was floating and glowing. He’s my modern day hero, no doubt. But this blurb isn’t about him. I would need a book to write about my dear father Rabbi Shlomo Schwartz, aka Schwartzie. This is about the best distraction ever, and the pride that Jewish brethren have for each other.

So I’m sitting at my window seat and getting comfy for the short flight from Frankfurt to Israel, when the Israeli Olympic Judo winner -whose hand would not be shaken by his loser Egyptian opponent- comes in and scoots down in the aisle seat. His coach sits down between us. I grew up in LA and really don’t get all caught up in the hoopla of Hollywood. But I found myself honored and humbled to be in Ori Sasson and his coach, Oren Smadga‘s presence. It’s eye opening and fascinating to have these modern day Heroes of Israel sitting in economy, folding their massive legs into these tiny spaces. I hate to be a star gazer so I introduced myself, congratulated them and said I will not bother them – but only after one request. I asked Sasson to record a video for my dad and tell him to be a fighter and get better faster!

Sasson did it beautifully and with sensitivity.

But every Israeli is family and so of course we get to talking and laughing and sharing family secrets within five minutes.

Coach told me that when Ori’s handshake was refused, he knew it would be awesome for the world to see that. He wanted the world to see with their own eyes that even in an Olympic sport where politics should be excluded, the hate is overwhelming towards the Jews even though as usual, the Jew comes to the Muslim with outstretched arms of peace.

He then proudly went through his iPhone pictures showing me the sequence of events how this went down. They got hundreds of FB messages that arabs will kill him if he touches the Egyptian. And as he was approaching the pillar they go up to before they get in the ring, all the Egyptians mates and coaches were pounding their chests and saying allahu Akbar!

This hulk of a guy Ori, is Refined and talks gently. He smiles easily! He’s young and single and super good looking- which of course is ridiculous. Where’s a nice Jewish girl when u need one?

Coach continues to show me pics of his family (his 12 year old son is a model, oldest is about to go into the army, he’s training his nine year old in judo. I know so much, I now feel related.) He’s showing FB posts about them and also blurbs from the likes of Mayim Bialik that he was impressed with and wondered who she was- popular or not? I assured him she’s hot on the Hollywood press these days (since of course my sister Aura Rosenblatt writes for Mayim) and he was totally honored. He also mentioned his brother who was hurt badly in an accident and died not too long ago. He started to cry. (How do I draw this stuff out of total strangers?) Then of course I told him he’s in good company with my Shula who also died in an auto accident. We all laughed, total strangers, and agreed to keep the conversation happy.

An FYI – this coach was the first Olympic gold medalist for Israel in Judo 24 years ago. And his dad was his coach. So now, Sasson, his coach, and grandpa Saba, are all traveling together!

In the middle of all this, of course I squeeze out the word Chabad and the Rebbe whenever I can in the conversation, and everyone knows and loves or has been part of Chabad somewhere.

I asked Sasson about his involvement in Judaism and he was proud to say he put Tefillin on the day of the winning match. He consented when I told him he also must put Tefillin on tomorrow in showing thanks to the same God. I mentioned what the rebbe said in regards to the fact that Tefillin protects the land and people of Israel. He also said his favorite line from the Rebbe is “the will of a person shows his personality”. Who knew?

I’m working on this team to get involved with Chabad’s Victims of Terror. Coach gave me his cell number and both Coach and Sasson said they would be “honored and it would be a pleasure” to visit hospitals and wounded soldiers or other victims to the senseless terrorism that’s been rampant in our land. They were excited to do it. God willing I’m gonna orchestrate and make this happen. Yossi Swerdlov Menachem Kutner, Gonna make this happen!!

The flight’s almost done and they’re all getting into the team spirit. There will be a big welcome at Ben Gurion. Can’t wait. There’s nothing like the feeling of Israelis who are proud of the Homeland. The happiness and pride is tangible. Everyone is abuzz and feeling like we all just won the medal. Ori’s Joy is our Joy. Jews are one big family. No doubt he fought hard to win the medal for himself but I believe he worked equally hard to be a champion for his country and his people!

Oh man! It’s like a fraternity in here. They’re getting ready to land and the guys are spraying deodorant, dabbing cologne, putting on their team tee shirts and passing around spearmint gum. I got in on the latter.

We’re landing and I see the nerves are getting activated. Oren and Ori are a bit quieter now and legs are tapping back and forth. Heads are leaning on seats in front of them and eyes are squeezed shut. They’re quiet for the first time in two hours.

These are representatives of the Land of Israel and everything we stand for as a Nation of Jews. May hashem watch over them and protect them. Keep making this country proud. Am Yisroel chai!