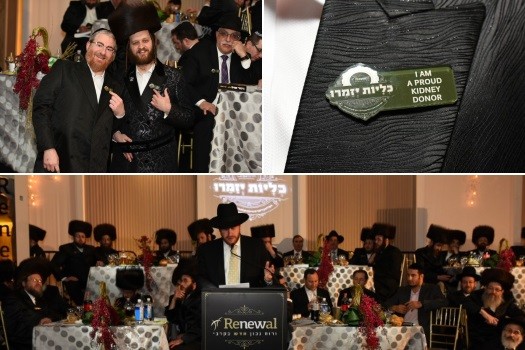 Close to 3,000 people turned out at Ateres Chaya on Motzei Shabbos for a dinner honoring over twenty dozen Orthodox Jewish men and women who donated kidneys through Renewal, a nonprofit organization dedicated to assisting people suffering from various forms of kidney disease.

One of the highlights of the night was the first meeting between a recent donor and a recipient.

“The donor preferred to remain anonymous but I finally convinced him on Friday to let his donor meet him,” Mendy Reiner, the founder of Renewal, told VIN News.  “I invited them both up on stage and it was the moment of the night. The band went haywire and the whole crowd stood up and was dancing for 15 minutes. It was beautiful.”

While there were many prominent rabbonim in attendance at the melva malka, seated at the head table were kidney donors from all walks of life, many of whom had to be persuaded to sit in their positions of honor.

Rabbi Joel Labin, told the crowd how he shared his own kidney donation with VIN News and several other outlets in November, 2013 in an effort to spark greater interest in kidney donation.

“Every kidney donation has an impact on others, especially when you go public,” said Rabbi Labin.  “After people read about my donation, they called me up and asked me questions and a lot of people at the melava malka were my ‘taldmidim’.  That is how it goes. When someone donates a kidney, then his brother does and then his friend does.”

Reiner said that Renewal has played a part in 329 kidney donations so far but there are still almost 300 people in the Jewish community in need of a kidney transplant.  He estimated that last night’s event will inspire at least another 15 kidney donors to step forward.