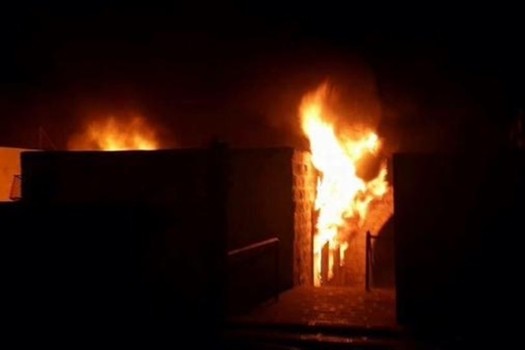 A mob of hundreds of terrorists set fire to the compound housing the tomb of Joseph in the historic city of Shechem (Nablus) before dawn on Friday, bringing widespread condemnation from around the world.

Kever Yosef (Joseph’s Tomb) has been under the control of the Palestinian Authority in recent years, with occasional prayer permitted to Jewish worshipers accompanied to the site by Israel Defense Forces guards. The perpetrators of last night’s arson were dispersed by Palestinian police, who put out the fire, but have made no arrests. There were no Jewish people present at the site during the riot and no reported injuries.

Immediate and widespread condemnation for the arson came from around the world, and authorities pledged to repair the damage and to make the site available again for Jewish worship.

Last night’s attack was certainly not the first by Arabs against this historic Jewish religious site. In 1926, the Jewish inhabitants of Shechem were forced to leave in the face of Arab pogroms. A year later, an earthquake destroyed most of the Old City of Shechem, including the Jewish quarter.

Following the Six-Day War in 1967, Shechem and the surrounding areas reverted to Jewish control; however, while tourism in the area was encouraged, Jews were not permitted to live there.

As a result of the persistence of dedicated activists, there are now several established Jewish communities on the mountain ranges surrounding Shechem: Kedumim, Yitzhar, Har Bracha and Elon Moreh. Within Shechem itself, a yeshivah was formed at Joseph’s Tomb in 1982, called “Od Yosef Chai” (“Joseph still lives”—the famous words spoken to Jacob following many years that he presumed Joseph to be dead).

In 1996, Shechem was given over the Palestinian Authority. Joseph’s Tomb was to remain in Jewish hands, but in the early days of the 2000 intifada, that, too, was given up under fire. The Palestinian Authority promised to prevent damage to the site, but within a few hours, a mob broke into the compound and destroyed everything. Furniture and holy books used by the yeshivah were burned, and the place was reduced to rubble.

The first Jews weren’t allowed to visit the site again until 2003. Now there are a few visits a year that take place in the middle of the night.

Following last night’s arson came renewed calls to reopen the site for regular worship and study once repairs have been made.

Meanwhile, an IDF soldier in Hebron was stabbed and moderately injured by an assailant posing as a journalist. The attacker was shot and killed by security forces. In Jerusalem, a police dog identified a pipe bomb during sweeps near Hebrew University on Mount Scopus, and a teenage boy who police believe was going to carry out an stabbing attack was arrested carrying a knife in the Old City.

Today’s incidents followed a series of attacks that have left seven Israelis dead and scores wounded since the beginning of October.