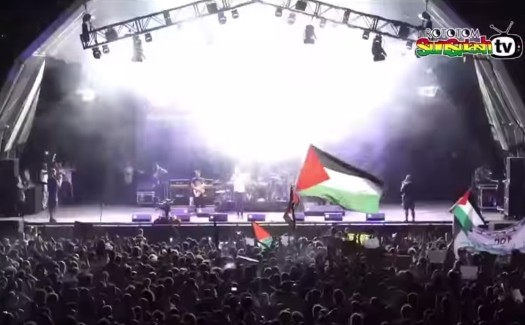 Faced With Sea of Palestinian Flags at Spanish Festival, Matisyahu Belts Out ‘Jerusalem’

After failing in an attempt to have Jewish-American singer Matisyahu banned from a Spanish music festival, the BDS bigots had yet another trick to unveil as he ascended to the stage on Saturday night.

Not to be cowed however, it was the spirited Matisyahu who had the last laugh.

Far from boycotting the reggae artist’s gig, the “hate Israel” crowd showed up en masse. And they came bearing flags, immense Palestinian flags, which they waved with gusto from every corner of the 20,000-strong crowd.

As Matisyahu took the mike and looked out to the audience, he was presented with an unmistakably hostile message. It was clear that those who sought to have him banished stood before him in protest. Then the catcalls started, with some chanting, “out, out.” It might easily have been unnerving, disorienting.

But then he began to sing about Jerusalem.

And then, as he bounced and twirled around the stage, the most defiant lyrics of all: “3, 000 years with no place to be, and they want me to give up my milk and honey.”

“Tonight was difficult but special,” he later posted on Facebook, along with a clip of the performance.

What courage. Not to be intimidated when the concert organizers demanded he pacify the BDSers, and then to return to the festival’s schedule in defiance of the opposition, and chant Jerusalem on stage with such gusto.

Now if only life would start to imitate art.