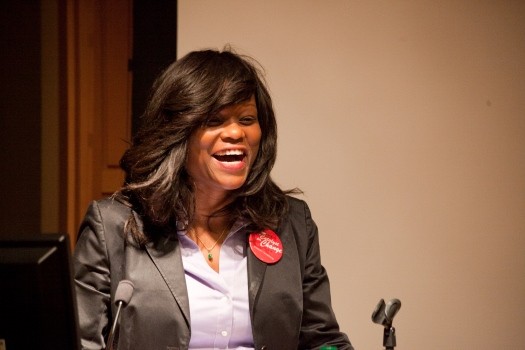 Two days after making divisive remarks about the Jewish community during a heated radio interview while discussing Governor Cuomo’s proposed tax credits to provide relief to some private school parents, a Brooklyn Assembly member has issued a formal apology.

In a statement released yesterday, Assemblywoman Rodneyse Bichotte (42nd Assembly District) apologized for the heated exchange, which took place during Leon Goldenberg’s Community Matters program which aired at 10 PM on Saturday night on WMCA.  In her apology, Bichotte noted that disagreements can often arise when debating emotional issues.

“This was evident during a recent radio interview I had with Leon Goldenberg and I apologize to anyone who was offended by my tone and the poor choice of words I used.”

Bichotte’s short apology came as part of an over 900 word press release that described at length the merits of the assembly bill she sponsored over the one proposed by the governor.  Despite its brevity, the apology was sufficient according to Assemblyman Dov Hikind, who took his colleague to task a day after the interview, calling her remarks “shocking”, “insensitive” and “inappropriate” and blasting the assemblywoman for attempting to cast the tax credits as a racial issue.

“When someone apologizes, that says it all,” Hikind told VIN News.  “You move on from there and hope that things like this don’t happen again. It was all unfortunate, a huge mistake but it’s over.  She said ‘I’m sorry,’ so you move on and hope that everyone learns their lessons.”

Bichotte referred to the members of the Jewish community as “you guys” multiple times in her discussion with Goldenberg and accused the Jewish community of unfairly attacking her for her part in the Assembly’s lack of support for the governor’s proposed bill because she is a black woman.  Bichotte asked Goldenberg why previous Assembly members hadn’t been criticized for their failure to pass any type of tax credit for private school parents.

“Just think about it,” said Bichotte.  “Shelly Silver, who has been in office for twenty years, you guys put him on a pedestal and he didn’t even put this on the floor, okay?  Rhoda Jacobs who was in before me, no one, no one ever pushed her the way you guys are pushing me and then I have to ask, is it because I am a woman?  Black? Whatever? I mean is it because I am freshman? Ridiculous.  I expect the same level of respect and I expect the same standard of understanding.”

Taking a shot at the lack of support from the Jewish community during the election, the assemblywoman, whose district includes a sizable chunk of Midwood, said that she intends to advocate for those voters who supported her.

“My district is 80 to 90 percent public school parents,” observed Bichotte.  “They are not happy to find out I sponsored an education tax credit.  They’re not happy.  And I’m taking a risk. And it’s not like the majority of the Jewish district has voted for me or supported me.”

Asked by Goldenberg if she represented all residents of her district Bichotte replied, “I represent the entire district.  The people I listen to are the ones who support me and are going to vote me in.”

A clearly agitated Bichotte acknowledged that she did have some supporters in the Jewish community, but that she felt that her Jewish predecessor, Rhoda Jacobs,  had received preferential treatment from district residents.

In a statement emailed to VIN News, Rona Taylor, a spokesperson for Bichotte said that the assemblywoman was attempting to illustrate that she felt she was being held to a different standard than previous members of the Assembly who had also not supported prior attempts to pass a tax credit for private school parents.

“Why is the member being pressured to support a bill that the previous leadership did not/would not support?” wrote Taylor.

Taylor also said that the phrase “you guys” was taken entirely out of context.

“The member was referring to two to three people in the community and therefore the words ‘you guys’ was not being directed towards the Jewish community as a whole,” explained Taylor.

Taylor said that Bichotte would be speaking with leaders of the Jewish community today who were in Albany to lobby for tax relief for private school parents, including Goldenberg.

VIN News was unsuccessful in its attempts to reach out to Goldenberg regarding his conversation with Bichotte.