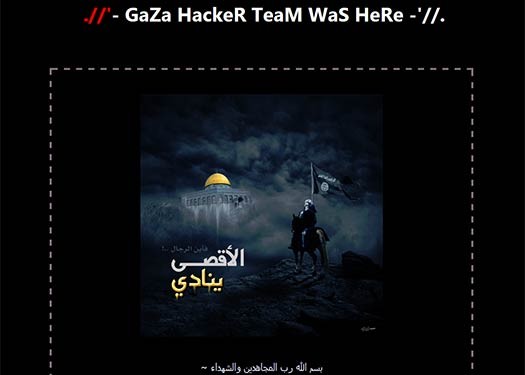 The website for one the largest print newspapers in the Jewish world, the Jewish Press, has been hacked and their homepage has been replaced with messages of hate and threats by a group calling themselves ‘Gaza Hackers Team’.

Visitors to the site JewishPress.com realized the homepage was changed at around 10:00pm and instead of the regular homepage they were greeted with messages of hate, filled with threats.

According to a message posted in place of their regular homepage they stated that they hacked “sons of Zion sites” as revenge for the death of Jaafar Awad, a 22-year-old Arab man who died as result of a prolonged medical condition which they blame on the State of Israel.

Their hate filled message goes on and threatens every website operated by ‘Zionist’ and that ‘no data will be safe’.

Other pages with direct links are working fine, so it appears that they hackers exploited a weakness in the sites security that did not affect the entire site.

A representative from the Jewish Press told CrownHeights.info to “‎please warn people not to go on our site, it may infect their computers,” adding that they were working on fixing the site.