« Two Men Assaulted in Separate Attempted Muggings
Video: “Are you in a Tight Spot?” » 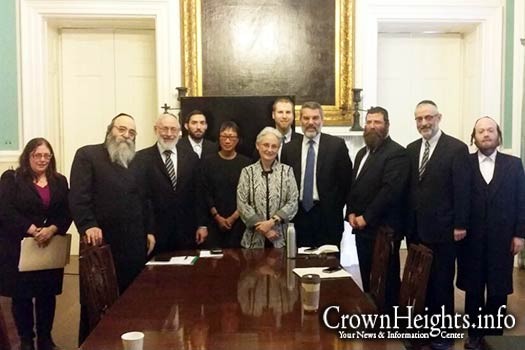 A new tentative agreement between the De Blasio administration and a coalition of rabbinical leaders from across New York City has waived the mandated ‘informed consent’ form.

Mayor Bill de Blasio’s administration, which came into power a year ago with a promise to reconsider an existing regulation on Metzitzah B’peh, has now fulfilled that promise.

Mayor de Blasio said he reached the new arrangement after long negotiations with rabbinical leaders. Under the new policy, the city will engage local health care providers to educate the Jewish community about the risk of a cold sore, caused by the herpes simplex one virus, causing a herpes infection of the child’s genitals.

“While the de Blasio Administration continues to believe that MBP carries with it health risks, given the sacred nature of this ritual to the community, the administration is pursuing a policy centered around education of health risks by the health care community and respect for traditional practices by the religious community,” Mr. de Blasio’s office said in a statement.

“Increasing trust and communication between the City and this community is critical to achieve the Administration’s ultimate goal of ensuring the health and safety of every child, and this new policy seeks to establish a relationship based on engagement and mutual respect.”

A 2012 report by the federal Centers for Disease Control and Prevention advised against the practice, saying it increases the risk of herpes infection in baby boys by 3.4 times that of other male newborns.

Rabbi Chaim Dovid Zwiebel, executive vice president of Agudath Israel of America told YWN “The Bloomberg Administration’s regulation of metzitzah b’peh represented the first and only time in the history of the United States that government has sought to regulate an aspect of bris milah. Our Gedolei Yisroel felt that this was intolerable, and could lead to other governmental incursions on bris milah, and so instructed us to mount a legal challenge against the regulation. It is to Mayor de Blasio’s eternal credit that he recognized how profoundly offensive the regulation was to our community, and worked with us to undo the terrible precedent his predecessor had established.”

“I’m thankful to Mayor de Blasio and his entire administration, specifically Deputy Mayor Lilliam Barrios-Paoli, the Mayor’s senior aide Avi Fink and the Department of Health, for doing what it is right, eliminating this Consent Form, which was intrusive and violated our freedom of religion and speech,” said Rabbi David Niederman.

“From day one, Mayor de Blasio showed an eagerness to work with all communities towards fair policies that will deliver the best results for the entire city. Today’s action is a result of that noble vision and hard work. We are profoundly thankful to the mayor for that, and we are thanking Hashem that our religious freedom prevailed. Today’s action rebuilds the trust necessary to work together for the safety of all. It’s a victory for religious freedom and a victory for public policy.”

NYC Councilman David Greenfield told YWN, “I applaud the administration for agreeing to respect the religious freedoms of all New York’s communities. Separation of church and state is a two-way street. It is significant that the administration is agreeing to do away with ineffective measures put in place by Mayor Bloomberg, and instead embraced an informational campaign that has proven effective in other parts of the country. This is a big victory for our community.”

« Two Men Assaulted in Separate Attempted Muggings
Video: “Are you in a Tight Spot?” »