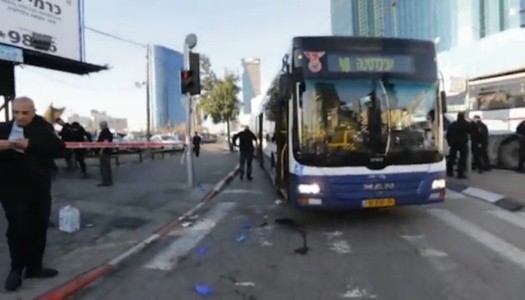 A Palestinian terrorist stabbed twelve passengers on a Tel Aviv bus this morning, Wednesday. The 23-year-old man from the West Bank city of Tulkarem was later shot in the leg by police after he got off the bus. He is under arrest and is being questioned.

Four of the victims were seriously wounded, emergency services said. Five people were either lightly or moderately injured, and several other passengers were treated for shock.

“The heroic stabbing incident against the Zionist in Tel Aviv is a daring and heroic act,” he said. “It comes as a natural response to the terrorist occupation crimes against our people.”

Israeli Prime Benjamin Netanyahu retorted: “The terrorist attack in Tel Aviv is the direct result of the poisonous incitement being disseminated by the Palestinian Authority against the Jews and their state. This same terrorism is trying to attack us in Paris, Brussels and everywhere.”

CNN reports that this attack is the latest in a string of attacks against Israeli residents in recent months:

• A Palestinian man threw acid on an Israeli family near a Jerusalem checkpoint in December.

• A teenage Palestinian girl with a knife stabbed an Israeli man in the West Bank.

• Two Palestinian cousins stormed a Jerusalem synagogue in mid-November with a gun and butcher’s knives, killing five. They were shot dead by police.

• More than a week earlier, attackers stabbed one Israeli soldier to death in Tel Aviv and three more Israelis near a West Bank settlement, the IDF said. One of the West Bank victims also died.

• In early November, a Palestinian man driving a van plowed into pedestrians at a train stop in eastern Jerusalem, killing two. Another 12 people were injured. The man died in police gunfire after also attacking people with a metal bar, police said.

• In October, a Palestinian man rammed his car into commuters waiting at a light rail stop in Jerusalem, killing a baby and wounding several other people, Israeli police said. The driver of the vehicle was shot as he tried to flee and later died.

• Also in October, according to a Palestinian state news report, an Israeli man killed a 5-year-old Palestinian girl when he ran her down in a car as she walked home from kindergarten. The attack reportedly also injured a second 5-year-old girl.