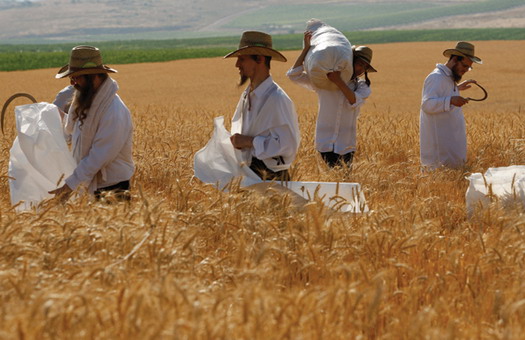 The Miracle that Saved the Residents of Kibbutz Sufa

The following story appeared on the Israeli website Radio Kol Chai, as told by Avi Jacob (and translated by Rivka Friedman). Yet another story whereby following Hashem’s will, a disaster was averted:

Three weeks ago a group of residents came from Bnei Brak to Kibbutz Sufa in order to harvest wheat for Pesach. They harvest the wheat every summer when the sun beats down on the fields, thoroughly drying the wheat. The wheat is then stored until the winter when they start the production and baking of matzos.

Aharon Samet, owner of the “Samet” factory producing “tzitzis” fringes, is the Badatz community supervisor for the wheat harvest. On a radio program today with Rabbi Moshe Ben Lulu, Samet told the story of the great miracle which occurred for the people of Israel thanks to this year’s wheat harvest.

“This year we are getting ready for the Shmitta agricultural sabbatical year, so this summer we harvested wheat grain for two years. We searched the whole country, looking for wheat which was sown late in the season and needed rain which fell late. At Kibbutz Sufa right next to the Gaza border we found an entire field sown in mid-January, which was considered very unusual, so we found 2000 acres of green wheat which was just right for us, “said Samet.

“We harvested the wheat,” said Samet, “and we ran into military police, as well as undercover and regular police who came to check out who we were.” The Gaza air campaign was already underway, and Samet and his colleagues saw the smoke clouds over Gaza, and heard the sirens while they were busy harvesting and transferring the wheat to trucks and moving them towards the cleaning plant near Masmiya for cleaning the wheat, fumigating and tithing it.

Two days later 13 terrorists came from Gaza out from the tunnel which opened into the fields near Sufa. The terrorists had been planning a big attack, and had been counting on hiding among Sufa’s giant wheat field–which the matzah makers had just chopped down in its entirety. The terrorists couldn’t understand how their camouflage had disappeared.

The empty field enabled military observers to easily spot and identify the terrorists and open fire on them. Many Jewish lives were thus saved by the grace of Heaven.