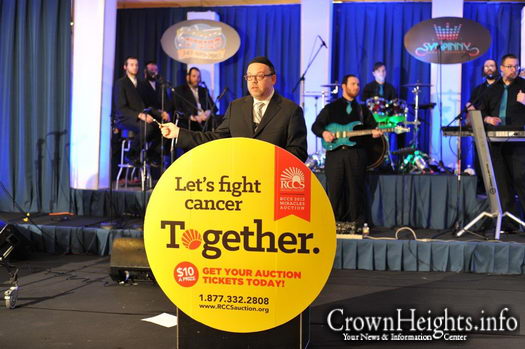 In the wee hours of Wednesday morning, with tens of thousands listening and watching via a multi-channeled simulcast, the Rofeh Cholim Cancer Society (RCCS) awarded their Split-the-Pot jackpot of over $300,000 to the Weiss Family of Monsey, NY.

In addition, more than 50 other fabulous prizes were awarded, direct from the Rofeh Cholim Cancer Society (RCCS) headquarters, as the culmination of this year’s RCCS Miracles ‘13 Chinese auction campaign.

Because of the record number of cancer-stricken patients this year assisted by RCCS, in the USA and Israel, the results of this year’s RCCS Chinese Auction effort, together, were more important than ever. Although the auction has officially ended, RCCS executives stress that it is not too late to help the over one thousand patients they serve each year, and that donations can still be made through their web site: www.rccscancer.org, or by calling 718-RCC-2002.

Yossi Zweig of the Z Report Live, together with Rabbi Yosef C. Golding, Charlie Harary, Esq. and noted comedian, MODI, emceed the evening. The musical aspect of the evening was led by the Sympinny Band, accompanied by Shlome Gertner from England and the Hamizamrim singers, led by Chilu Posen.  A heart-touching rendition of Rabbi Baruch Levine’s U’faratzta was performed by the Shir Veshevach children’s choir, directed by Chaim Meir Fligman.

These stars in the world of Jewish music, coordinated by producer Gershy Moskowitz, gave of their unique talents to benefit the over one thousand cancer patients annually being assisted by RCCS, the Rofeh Cholim Cancer Society.  A special moment came when Yossi Green told the audience of his affinity for RCCS and then composed a new song, Refaeinu, on the spot.

The evening, originally slated for 3 hours, lasted for over 7 hours; the phone and internet lines were jammed for hours as thousands of last-minute orders came in to the RCCS office. As a result of this campaign, hundreds of Chanukah Packages for RCCS families, all age and gender appropriate, were also donated, and they will be delivered this week by RCCS volunteers.

Despite the entertainment and good time had by all, the seriousness of the evening was evident. Inspirational interviews were aired with several family members of RCCS patients, with Rabbi Yosef Mizrachi, Mordechai Weinberger, the Amein v’Amein panel, a panel which teaches the dos and don’ts of Bikur Cholim, and with Rabbi Aaron Steier, director of RCCS Lakewood, who recited Tehillim with  a group of yeshiva children on behalf of the patients of RCCS.

In addition, Dr. Yechiel Zagelbaum, noted pediatrician in Williamsburg and Boro Park, in a testament to his high regard for RCCS’ life-saving work, answered questions in regard to childhood illnesses, and how the RCCS office is the first phone call he makes when a cancer diagnosis presents itself in one of his little patients.

The audience also heard a ten minute impassioned message from Rabbi Dovid Orlofsky of Jerusalem about the ills of smoking, and a candid discussion with Dr. Joel Rosenshein on the psychological impact of a cancer diagnosis.

Since 1997, RCCS, the Rofeh Cholim Cancer Society, has been “Funding Miracles” by providing an array of services for cancer-stricken patients in need.  Primary among these life-saving programs is the subsidizing of health insurance premiums, enabling these patients to obtain the best possible medical care.