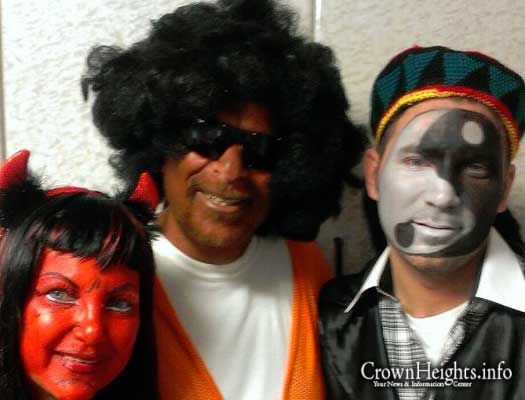 A prominent state assemblyman from Brooklyn defended himself on Monday after wearing blackface to a party he hosted to celebrate the Jewish holiday of Purim, saying he did not mean to offend anyone.

The assemblyman, Dov Hikind, a Democrat and a longtime power broker in the Orthodox Jewish community, wore an Afro wig, brown makeup, an orange jersey and sunglasses as part of a costume that he said represented a “black basketball player.”

“The main objective that I have is not to be recognizable,” Mr. Hikind said in an interview. “Of course the intention was not to offend anyone. That’s the last thing that I ever imagined that would happen, to be very honest. It never crossed my mind.”

Mr. Hikind had hundreds of guests to his home on Sunday, and as he said he had done in past years, he enlisted a professional makeup artist to help him with his costume. When his grown son, Yoni, asked him if he could post a photograph of the outfit on Facebook, Mr. Hikind said he did not see a problem with it.

But on Monday morning, after The New York Observer published an article about the costume, Mr. Hikind found himself at the center of a firestorm. He initially brushed off the attention, writing on his blog that it was a product of “political correctness to the absurd” and adding, “There is not a prejudiced bone in my body.”

Over the course of the day, a parade of elected officials condemned Mr. Hikind. Several candidates for mayor of New York City demanded that he apologize, and the Assembly speaker, Sheldon Silver, called his actions “inappropriate and offensive.”

Assemblyman Karim Camara, the chairman of the New York State Black, Puerto Rican, Hispanic and Asian Legislative Caucus, said the outcry on Monday “wasn’t just about being politically correct,” and that he hoped Mr. Hikind realized that blackface “has a very painful history to many people.”

“A lot of black leaders and clergy — elected officials, everyday citizens — were very upset or offended, and had a lot of questions as to, from their point of view, how could someone be so insensitive,” he said.

In a letter to Mr. Hikind, the City Council’s Black, Latino and Asian Caucus wrote that his costume and his initial defense of it were “deeply disturbing,” and asked him to meet with community leaders.

Even the Anti-Defamation League weighed in, saying that Mr. Hikind “showed terrible judgment.” And State Senator Simcha Felder, a Brooklyn Democrat who was once chief of staff to Mr. Hikind, and now represents many of the same constituents, said the costume was regrettable.

“Purim is a happy time, a happy day, and it should not be at anyone else’s expense,” Mr. Felder said.

In the interview, Mr. Hikind said that he was flabbergasted by the outcry, and that he suspected many did not understand the tradition of dressing up for Purim.

“My wife, you saw the picture, she was the devil,” Mr. Hikind said. “Believe me, she’s not the devil.”

“A lot of people just don’t realize, on Purim, in a sense, forgive me for saying this, you do crazy stuff,” he added. “It’s not done, God forbid, to laugh, to mock, to hurt, to pain anyone.”

But Mr. Hikind said he had learned a lesson from the blackface episode.

“Next year I was thinking I’d be an Indian,” he said. “But you know, I’ve changed my mind about that. I don’t think that’s a good idea. Somebody will be offended.”