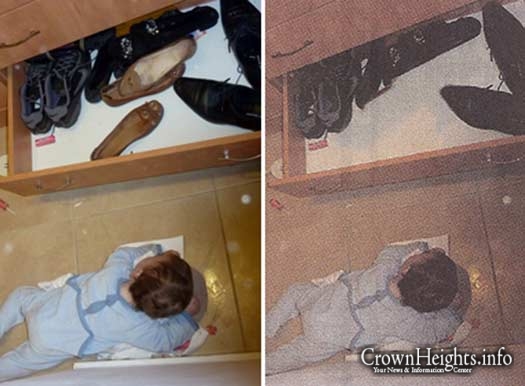 Before (left) and after. Woman's shoes deemed to immodest? (photo by the Jerusalem Fire Dept.)

Is it going to far? The Jerusalem Fire Department released a photo of baby trapped in room by drawer blocking door; the Hamodia daily ‘edited out’ a pair of woman’s shoes from picture due to ‘modesty concerns’.

The Hamodia daily, one of the United Torah Judaism party’s official journals, decided to “erase” women’s shoes from a picture of a shoe drawer published in a news report, likely due to “modesty concerns.”

The haredi sector’s daily newspapers, which operate under the strict supervision of a “spiritual committee,” have an old tradition of refraining from publishing pictures of women. In the past, they even avoided mentioning women’s first names.

Sometimes, due to the great sensitivity of the issue, new restrictions are formed – as in this case.

Hamodia published a report about a baby who opened a shoe drawer, which blocked the door to the room he was in. He got trapped inside the room and fell asleep – before being rescued by firefighters and emergency forces.

A member of the rescuing force, Asaf Abres of the Jerusalem Fire Department, took a picture of the baby with the drawer and distributed the photo to the media. In the haredi paper, however, it was only published after the graphics department deleted a pair of women’s shoes which were in the drawer.

A source in the newspaper confirmed that Hamodia permits the publication of accessories like bags but censors feminine items like clothes and shoes.

This isn’t the first case of strict censorship in Hamodia. Several months ago, the newspaper reported that the cause of a fatal road accident near the Tapuach Junction in the West Bank was a car’s collision with two “wild other things,” referring to wild boars which are not mentioned by the haredi public as they are not kosher and a symbol of impurity.