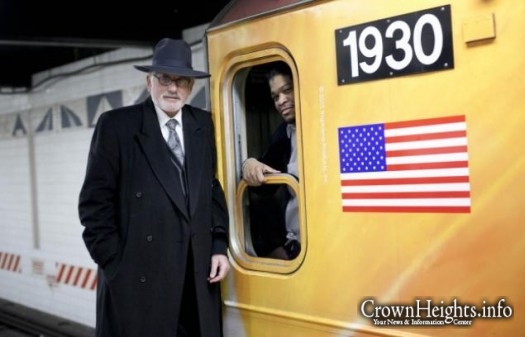 When there’s trouble on the tracks, transit workers turn to police, firefighters, paramedics — and The Rabbi. There’s no need for his full name. Anyone who has operated a train, welded rails or directed traffic from a radio tower in the last three decades probably knows Rabbi Harry Berkowitz.

The 65-year-old has been a subway chaplain for 34 years. He started ministering to the men and women of the transit police force, whose trust he earned by spending midnight shifts going on patrol with them in stations and on trains.

For the past two decades, Berkowitz has been head chaplain for NYC Transit, leading a God squad of ministers who provide emotional and spiritual support to transit workers during trying times.

“Within 15 minutes of a traumatic event, they call me,” Berkowitz said last week after visiting a motorman in a Manhattan hospital.

The motorman was taken to an emergency room for trauma after a “12-9” — subway code for when a train hits someone. The motorman was entering the 42nd St. subway complex when the man jumped from the platform.

End of story for the jumper. The beginning of a psychological struggle for the motorman.

If the crew is still on the scene, Berkowitz will find a quiet place to sit and talk. Usually, that’s an empty car on the train, away from the first responders — and the deceased.

“It’s tremendous shock. You can imagine. The train operator is going about his business, coming into the station, and someone jumps. It’s a very traumatic thing.”

If the transit worker asks to pray, then they pray. Primarily, the rabbi stresses to transit workers that there was nothing they could have done to prevent the tragedy. It was beyond their control.

“Sometimes, I don’t even talk about the incident, if they are not ready,” the rabbi said. “I start talking about family, other train operators, anything but that subject matter, just to calm them down a bit, just to get their mind away from it. I try to divert them, give them a sense of calmness and establish a relationship, a trust.”

Track tragedies — both fatalities and injuries — aren’t the only calls that come into the chaplain’s office, but they are the vast majority.

Berkowitz estimates that he’s responded to some 1,600 12-9 calls over the decades. If he doesn’t go, one of his volunteer clergy is sent. A transit chaplain — there are 85 — is strategically located within minutes of every station.

The chaplains include Catholic priests, Baptist ministers, Muslim imams and nondenominational members of the clergy.