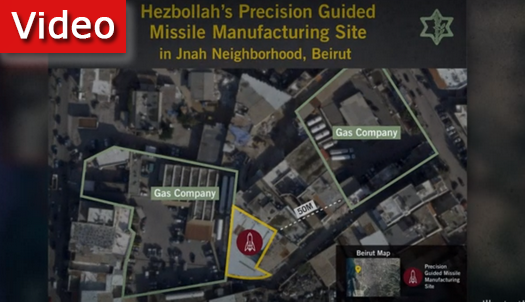 Following Prime Minister Netanyahu’s revelation at the United Nations that Hezbollah has a missile storage depot in the neighborhood of Janah near the Beirut airport because Hezbollah, the IDF released more information about the weapons depot.

“Lately, various explosions occurred in populated areas in Lebanese territory. Among these explosions is the one which occurred last week, in which a weapons warehouse located in Ain Qana exploded. These explosions demonstrate how the Hezbollah terror organization is using Lebanese civilians as human shields,” the IDF stated.

“The PGM project, which is being carried out by both Hezbollah and Iran, includes the conversion of existing rockets into PGMs, as well as a well-planned PGM manufacturing array, operating via establishment of manufacturing sites on Lebanese territory. This project is yet another proof of the exploitation of Lebanese civilians by Hezbollah, and the ongoing Iranian activity via the terror organization, aimed to sabotage Lebanon’s stability and civilians.

“Today, a PGM manufacturing site, located in the heart of Beirut, has been exposed, alongside two additional sites.

The following is information about the three exposed sites:

1. A PGM manufacturing site in the industrial area of the Jnah neighborhood: Two gas companies are located adjacent to the site: the first immediately west of the site, and the second approximately 50 meters from it. A gas station is located a few dozen meters west of the site.

2. An underground PGM manufacturing site located in the Laylaki neighborhood: The site is located underneath a seven-story residential building, home to over 70 families. The site has two entrances, eastern and northern. Both a medical center and a church are located approximately 130 meters from the site.

3. An underground PGM manufacturing site located in the Chouaifet neighborhood: The site is located underneath a five-story residential building, home to approximately 50 families. There is a mosque located approximately 90 meters north of the site.

“The State of Israel and the IDF have reported these sites numerous times, both to the UN and additional diplomatic networks, as well as via various media channels. Hezbollah is illegally utilizing these sites, while putting Lebanese civilians at risk. The exposure of these sites today was made with the aim of calling the Lebanese government again, with the support of the international community, to intervene in the matter; and to allow Lebanese civilians to protect themselves from the risks caused by the entrenchment of the Iran-proxy Hezbollah in their country .

“These PGM manufacturing sites, deliberately placed in the heart of populated areas in Beirut, are risking first and foremost Lebanese civilians. The disaster which occurred in the Beirut Port last August and the explosion in September showcase the extent to which the lives, security, and property of Lebanese civilians are at risk.

“The State of Israel, and the IDF in particular, are monitoring these sites using advanced means, and are very knowledgeable in regards to the PGM project. They will continue to extensively operate against it with various methods and tools.