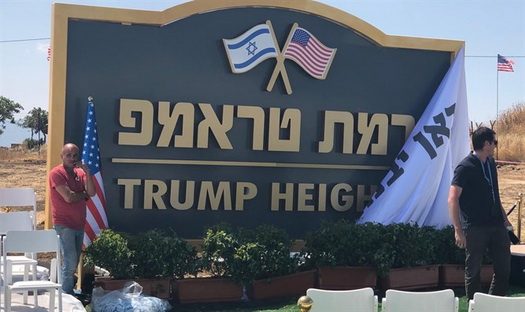 The Cabinet on Sunday approved the proposal to establish the community of Ramat Trump in the northern Golan Heights.

The ministers tasked the Settlement Affairs Ministry, through the settlement division, with establishing the first core of the community.

Settlement Affairs Minister Tzipi Hotovely said at the Cabinet meeting, “The decision to establish the community of Ramat Trump is great news for the settlement in the Golan Heights. The Settlement Affairs Ministry is starting to work to prepare the ground to be populated by the first core of families, which in the future will grow to 300 families.”

Ramat Trump is named after the 45th President of the United States, President Donald Trump, as a token of gratitude for his support of Israel and the decision that led to US recognition of Israeli sovereignty in the Golan.

Minister Hotovely also said that “the Settlement Affairs Ministry is leading the establishment of the first core in the community and will continue to work to strengthen the settlement in all parts of the Land of Israel.”

“The area does not yet fully realize its potential in terms of population size. The expansion of the settlement in the Golan is great news for an important and flourishing land, whose historical roots reach as far back as the time of the Hasmoneans,” she added.