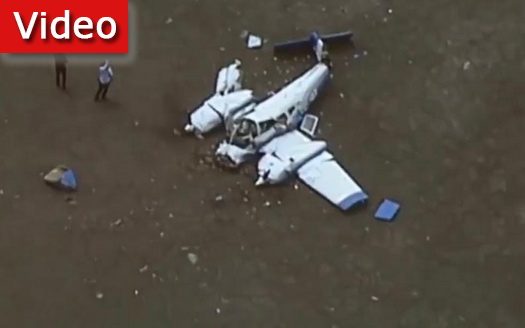 Four people were killed Wednesday, including one Israeli, in a mid-air collision involving two aircraft over Australia.

The accident, which involved two light over central Victoria, occurred near a flight training school while witnesses on the ground looked on in shock.

Each aircraft – one from the flight school and another privately owned – had two people on board at the time of the collision. All four people were killed in the accident.

“Unfortunately, they collided mid-air,” said Victoria Police spokesman Peter Koger, “and unfortunately both the occupants of both planes are deceased.”

Police say it is unclear what caused the accident, and an investigation has been launched.

One of the victims has been identified as 31-year-old Ido Segev, an Israeli citizen.

The Israeli Foreign Ministry confirmed that an Israeli national was among the dead, adding that the ministry is in contact with the local Israeli consulate.

“We are working with the family during this difficult time, and we are helping them with everything related to bringing the deceased back to Israel for burial,” the ministry said in a statement Wednesday afternoon.

“The family has requested that the name and identifying details of the deceased not be published.”