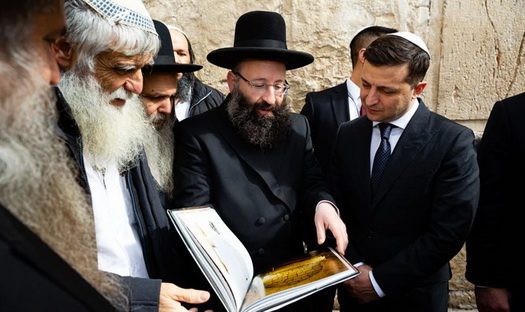 Zelensky, the first Jewish president of Ukraine, was received by Rabbi of the Western Wall Shmuel Rabinovich and Chair of the Western Wall Heritage Foundation Mordechai (Soli) Eliav, and heard an explanation of the archaeological findings recently discovered at the Kotel complex.

Zelensky was accompanied by Rabbi of Ukraine Moshe Hasman and Rabbi Shalom Arush. They said Psalms together and the president put a note in the Wall.

Earlier, Zelensky said he had decided to relinquish his assigned seats and those of the Ukrainian delegation at the World Holocaust Forum ceremony to be held today at Yad Vashem to mark the 75th anniversary of the Auschwitz-Birkenau death camp’s liberation.

Zelensky asked the tickets be given to Holocaust survivors who wished to attend the ceremony. Government ministers Ze’ev Elkin, Ofir Akunis, Amir Ohana, and Yifat Shasha-Biton also made a similar gesture.

The Ukrainian President tweeted: “We heard that many Holocaust survivors were unable to attend the World Holocaust Forum. The Ukrainian delegation gave them their seats, like some Israeli ministers. These people deserve all the honor.”

Zelensky, who arrived in Israel last night, added, “We will attend all the events and clear all scheduled meetings.”