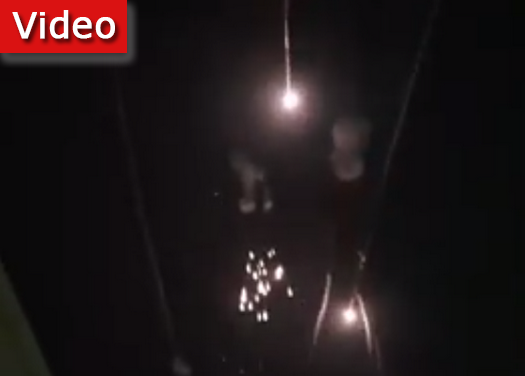 It was a difficult Shabbos for many residents of Southern Israel as Gaza-based terrorists fired 10 rockets into Israel in the hope of killing Israeli civilians. It began on Friday night, at 9:00PM, as the Red Alert was heard in Sderot and Shar HaNegev Regional Council communities.

The IDF detected at least 10 rocket launches from Gaza, directed at Israel. The Iron Dome rocket defense system downed eight of the rockets B’chasdei Hashem. One rocket slammed down in a yard of a private Sderot home. There was damage to home and vehicles.

In response, IDF fighter jets attacks numerous terrorist targets in Gaza, including Hamas’ navy, a military facility used for anti-aircraft fire, another military installation; this one equipped with a simulator for firing on tanks, a training base, a weapons manufacture facilty, a military storage base, and underground infrastructure serving Hamas.

Magen David Adom reports EMTs and paramedics treated a 65-year-old woman who fell running for cover, heading to a protected area. She was transported to Barzilai Medical Center in Ashkelon. On motzei Shabbos, hospital spokeswoman Ayelet Kedar reported there were also five victims treated for hysteria, all described in light condition. All have been treated and discharged to their homes, the motzei Shabbos report adds.