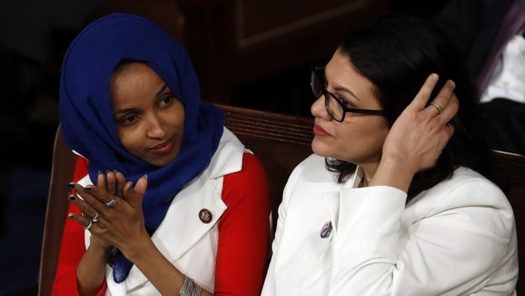 Israel will not permit two controversial Democratic lawmakers who have expressed support for the anti-Israel Boycott, Divestment, and Sanctions (BDS) movement visit the country on a planned trip next week.

“The decision was made based on the opinion of the Prime Minister, Binyamin Netanyahu, Foreign Minister Yisrael Katz, and Strategic Affairs Minister Gilad Erdan, after Minister Deri noted that the matter involved supporters of the anti-Israel boycott, who are prohibited from entering the country, according to the law regarding entry into Israel,” the Interior Minister’s office said in a statement Thursday.

“These are people who use the most influential platform in the world to express support for BDS organizations which call for the boycotting of Israel. The State of Israel respects the American Congress, as part of the close alliance between our two countries, but we cannot permit people into the country who seek to hurt the State of Israel.”

Despite the ban, Interior Minister Aryeh Deri said he would consider granting an entry visa to Tlaib, who has relatives in Samaria, on humanitarian grounds, should she request it.

“We won’t allow those who deny our right to exist in this world to enter Israel. In principle this is a very justified decision,” Deputy Foreign Minister Tzipi Hotovely (Likud) told Kan.

Under the law, the Interior Ministry may bar entry to individuals who have publicly expressed support for the BDS movement against Israel.

Both Omar and Tlaib, first-term Democrats who have sparked controversy for their comments on Israel which some have deemed anti-Semitic, have backed the BDS movement.

The decision was formally announced shortly after President Donald Trump posted a comment to Twitter urging Israel not to allow the two lawmakers in, claiming the two “hate Israel and all Jewish people”.

“It would show great weakness if Israel allowed Rep. Omar and Rep.Tlaib to visit,” Trump tweeted. “They hate Israel & all Jewish people, & there is nothing that can be said or done to change their minds. Minnesota and Michigan will have a hard time putting them back in office. They are a disgrace!”

The tweet came just hours after Israeli media reported that the Israeli interior ministry had decided to ban Omar and Tlaib from entering the country, due to their support for the anti-Israel Boycott, Divestment, and Sanctions (BDS) movement. Israeli law prohibits entry into the country by supporters of the BDS movement.

Two weeks ago, Israeli Ambassador to the United States Ron Dermer announced that Israel would allow the two to enter, in light of the strong messages he received on the subject from senior House officials.

The trip was planned by Miftah, a pro-Palestinian Authority NGO cofounded by PA negotiator Hanan Ashrawi. Omar and Tlaib had been scheduled to land in Israel Sunday.

It would show great weakness if Israel allowed Rep. Omar and Rep.Tlaib to visit. They hate Israel & all Jewish people, & there is nothing that can be said or done to change their minds. Minnesota and Michigan will have a hard time putting them back in office. They are a disgrace!