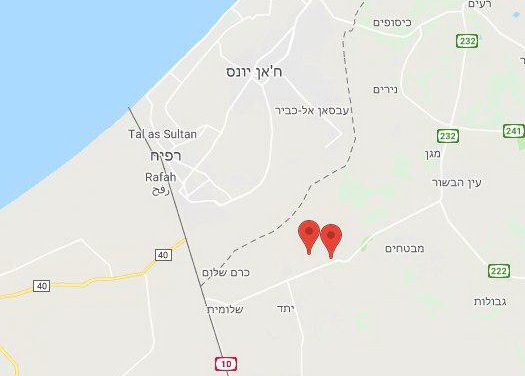 Two rockets were fired by Gaza terrorists towards communities in southern Israel on Friday evening.

Sirens were sounded shortly before 10:00 p.m. in Kibbutz Nir Yitzhak and Kibbutz Sufa in the Gaza envelope. Residents reported hearing an explosion shortly after the siren went off.

The IDF confirmed that one rocket was identified as being fired from the Gaza Strip into Israeli territory.

The rocket exploded in an open area. There are no reports of physical injuries or damages.

About an hour and a half later, residents of the Hof Ashkelon region reported hearing an explosion that sounded like that of a rocket.

The IDF confirmed that another rocket was fired from the Gaza Strip into Israeli territory.

The rocket exploded in an open area and there were no physical injuries or damages. According to the IDF Spokesperson’s Unit, a siren was only heard in the open area where the rocket exploded. No siren was sounded in the communities themselves as they were not in danger.

The incident comes a day after Hamas threatened Israel when one of its members was shot and killed by IDF soldiers firing on a group of Gazan men approaching the border fence.

The IDF later clarified that the shooting of the Hamas member at the border was a mistake.

Earlier on Friday, a senior Hamas member Fathi Hamad threatened revenge on Israel for firing at the Hamas member.

Speaking at the weekly “March of the Return” protests on the Gaza border, Hamad said, “Despite the Israeli apology, we will avenge the killing of the military activist yesterday.”

“Hamas will give Israel a week-long extension to implement the understandings of the arrangement, and if they are not implemented, the young people of Gaza will return to confront Israel,” he warned.