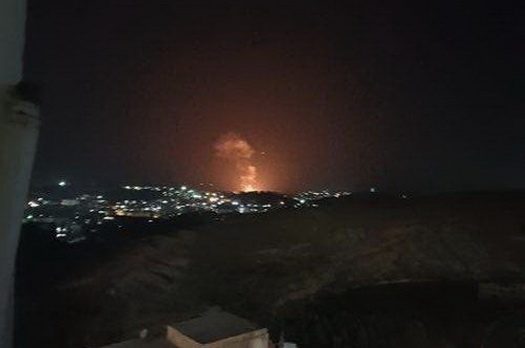 A Syrian military source said the anti-aircraft systems were activated in response to Israeli air strikes originating from Lebanese airspace.

Syria’s official news agency, SANA, reported that four people were killed in the attack, including a baby, and several others were injured.

According to the report, the missiles targeted the outskirts of the Syrian capital and the city of Homs.

The Al-Mayadeen television network, which is affiliated with Hezbollah, reported that one of the targets attacked by the missiles was al-Kisswa, which according to foreign reports has been attacked several times by Israel and which reportedly houses Iranian warehouses.

The Syrian Observatory for Human Rights reported that the attacks were carried out by Air Force and Navy vessels.

According to the report, the attacks targeted the Syrian army, Iranian militias, and Hezbollah in the suburbs of Damascus and Homs. It was also reported that at least ten targets were attacked in the Damascus area.

Several weeks ago, Syrian media reported that the country’s defense systems intercepted a number of missiles fired from Israel into southern Syria.

According to reports, the Israeli attack targeted the town of Tell al-Hara, located in the Daraa region, an area considered a strategic point overlooking the Golan Heights.

It was also reported that there were no injuries in the attack but that damage was caused to buildings. In addition, Syria claimed that Israel used technological means to disrupt radar systems during the attack.