« CHJCC Election Month Arrives, But Will We Have Elections?
Chabad of Markham Welcomes Torah for a Special Child » 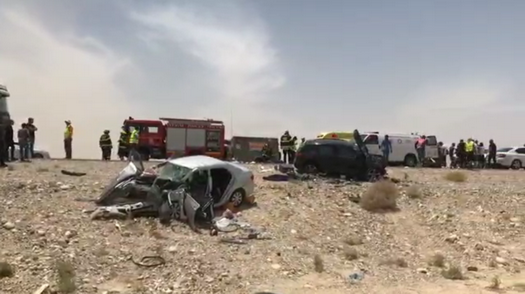 The victims of a fatal accident Thursday afternoon in southern Israel have been identified as new immigrants, who moved from France to Israel three months ago.

Two girls, ages four and seven, were killed in the crash, which occurred on the Arava road, Route 90, near Ein Yahav.

According to a report by Channel 12, the two girls killed in the accident had immigrated with their family to Israel from France three months ago, and were driving down from Tel Aviv to Eilat for a vacation.

The girls’ parents were both moderately injured, while their one-year-old brother was lightly injured.

Two people in the second vehicle involved in the accident were injured, one seriously the other critically.

The victims of the accident were treated at the scene by MDA and IDF emergency first responders before being evacuated by IDF and MDA helicopters to Soroka Hospital in Beer Sheva.

“I was driving with my family back home from a vacation in Eilat,” said MDA paramedic Raanan Hacham. “Near Paran I spotted a serious accident, with two cars which had collided head-on. In one car in the field near the road a man and woman were trapped, and next to the second car, which was on the shoulder, there were additional injured people lying on the ground. I immediately stopped and made a quick scan of the area to get an idea of the situation of the injured.”

“With the help of an army medical team which arrived and an MDA unit from nearby towns, we provided medical treatment to the injured, performed extensive resuscitation techniques on two girls, ages four and seven, but in the end we were forced to declare them dead. An MDA helicopter and army helicopters landed at the scene and evacuated five injured to Soroka Hospital, including three people in serious condition and two more in moderate condition.”

An initial investigation into the accident suggests that the head-on collision between the two cars occurred after one of the vehicles strayed from its lane and running into the second car, which was driving in the opposite direction.

« CHJCC Election Month Arrives, But Will We Have Elections?
Chabad of Markham Welcomes Torah for a Special Child »