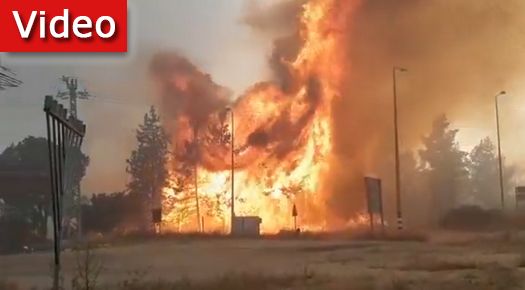 A series of wildfires have broken out in central Israel as the country suffers from a major heat wave.

The hot, dry weather has created perfect conditions for wildfires, and firefighting teams are currently deployed at several places across the country to contain the blazes.

The Israeli news site Mako reported that the fires were currently concentrated in the east-central area near the towns of Beit Shemesh and Modi’in. The blazes were serious enough to prompt the dispatch of six fire-fighting aircraft and the evacuation of at least one community, Kibbutz Harel.

Near Modi’in, 0ne of the fires was not contained and was reportedly heading north. Hundreds of reserve firefighters have been called out to fight the spread of the flames. The fires have destroyed power lines and disrupted the electricity supply to the area. The city of Modi’in itself did not appear to be in danger, as the fire was moving north, following the prevailing winds.

Thus far, no fatalities have been reported, though several have been injured.

Udi Gal, a spokesman for the Israel Fire and Rescue Services, described the scene at Kibbutz Harel, saying the fire was “very large” and “spreading via the strong dry winds toward other areas.”

“The fire is surrounding Kibbutz Harel, and there are dozens of firefighters and fire-fighting aircraft here,” he said. “We are fighting to save the houses. At the moment, all the eastern and northern sides of Kibbutz Harel are in the line of fire.”

“At the moment we have no control,” he added. “With the police, we evacuated the residents. We hope they can return soon.”