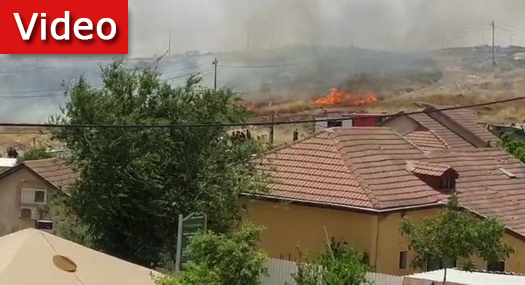 Six people were lightly injured from smoke inhalation as a large fire broke out Thursday afternoon near the Judea town of Beit Haggai, and firefighters are battling the fire. About 30 of the houses were evacuated, and the flow of electricity was also stopped.

Firefighting services point out that there are two large fire fronts and it is difficult to stop the fires. Aid of military containers is making its way to the scene.

In addition, eight firefighting and rescue teams are currently operating at four major fire points in the Beit Shemesh area.

Six fire planes with flame retardants were dispatched to the area.

At the same time, since the night firefighters have been dealing nonstop with hundreds of fire points throughout the Jerusalem district.

Following the burning of a grove near the Uzi Narkis bridge in Jerusalem and heavy smoke making it difficult to see drivers, the road was blocked by police until the end of firefighting efforts.

Route 44 was also blocked from Shimshon junction to Eshta’ol junction in both directions following a brush fire. Police are asking drivers use alternative routes.