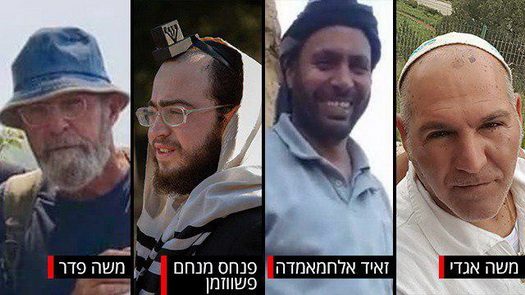 The four people killed in the recent rocket fire on Israel.

Israeli forces struck a ‘powerful’ blow against the Hamas and Islamic Jihad terrorist organizations in Gaza over the weekend, Israeli Prime Minister Binyamin Netanyahu said Monday morning, as he spoke out on the Egyptian-brokered ceasefire agreement with Hamas.

“Over the past two days, we struck a powerful blow against Hamas and Islamic Jihad,” said Netanyahu. “We hit more than 350 targets, we hit terrorist leaders and officials and destroyed ‘terrorist towers’.”

Netanyahu added that despite the ceasefire, the battle against Hamas was not over.

“The campaign isn’t finished, and it will require patience and careful judgment. We’re prepared for its continuation.”

“The goal was and remains to secure quiet and bring security to the residents of the south. I send my condolences to the bereaved families and I wish the injured a speedy recovery.”

Some 700 rockets were launched from Gaza towards Israel, killing four and injuring dozens.

Several coalition MKs ripped the ceasefire agreement, saying Israel failed to achieve its goals during the fighting, and gained nothing from the ceasefire.

“The ceasefire, in the circumstances it was reached under, has no gains for Israel,” said Likud MK Gideon Saar.

“The time between each round of violent attacks against Israel and its citizens is shrinking, and terror organizations in Gaza are strengthening. The fighting hasn’t been ended, just pushed off.”

“The battle with Gaza needed to end with seven hundred terrorists killed – one for every rocket fired at Israel, with heavy physical damage to Hamas, the kind that will take years for them to recover from so that it will be difficult for them to think of attacking again.”

“We cannot force one-and-a-half million citizens in the south to head to the bomb shelters every few weeks.”

Opposition lawmakers also criticized the ceasefire deal, with Blue and White party chairman MK Benny Gantz saying that “after nearly 700 rockets fired into Israeli territory, with four people killed and many injured – all of them as a result of the loss of deterrence – this [round] has ended with yet another surrender to Hamas and the terrorist organizations.”

“All the government has done, yet again, is leave the next battle at our doorstep.”

“Netanyahu used the residents of the south as a bullet-proof vest on his way to the complete surrender to Hamas. Netanyahu won’t solve the problem in Gaza. He doesn’t have the operational and political courage to do that. At the very least, he owes the people of Israel an explanation regarding the situation, but even that he doesn’t have the courage to do.”