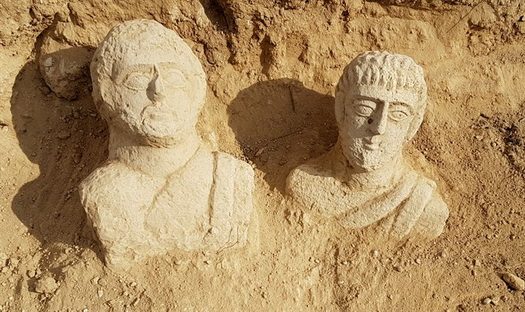 Two impressive Roman busts were found in early December near Beit She’an – thanks to the alertness of a local resident, who spotted the top of one of the busts’ heads sticking out of the ground as she was taking a walk north of the old city.

The woman and her husband called the Israel Antiquities Authority Theft Prevention Unit, and inspectors were quickly sent to the site. Together, they unearthed the first bust and as they worked, they found another one right next to it.

The busts, which date to the Late Roman period (3rd–4th centuries CE), were taken to the Israel Antiquities Authority laboratories to protect them from theft and to study and preserve them.

According to Dr. Eitan Klein, deputy head of the Israel Antiquities Authority Theft Prevention Unit: “These busts were made of local limestone and they show unique facial features, details of clothing and hairstyles. It seems that at least one of them depicts a bearded man. Busts like these were usually placed near or in a burial cave, and they may have represented the image of the deceased along general lines. Similar busts have been found in the past in the Beit She’an area and in northern Jordan. But not one resembles another, and that’s the importance of these finds. These busts are in the Oriental style, which shows that at the end of the Roman period the use of Classical art had subsided, and local trends came into vogue.”

According to Nir Distelfeld, Israel Antiquities Authority Theft Prevention Unit inspector: “It seems that the busts were exposed following the recent heavy rainfall in the area. These are very important finds, which tell us a great deal about the inhabitants of the Beit She’an area in antiquity. We thank the Beit She’an resident for her alertness and good citizenship and she will receive a certificate of appreciation.”

“The discovery of the busts fills in another piece of the puzzle in our understanding of the material culture of the people of this land in the past. These finds belong to everyone in the country, and now we can all enjoy them and understand their historical context. I don’t want to think about what would have happened if these finds had gotten into the wrong hands. It’s important to note that heavy winter rains can bring other finds to the surface and we call on people to report them to us.”