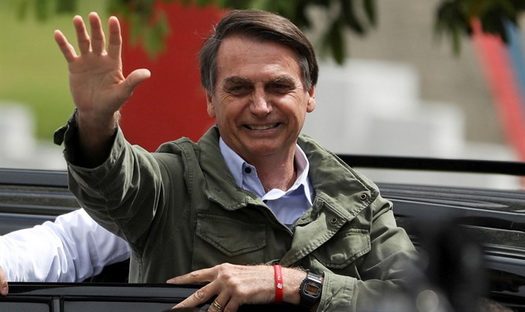 Brazilian President-elect Jair Bolsonaro announced his plans Thursday to relocate his country’s embassy in Israel from Tel Aviv to Jerusalem.

A staunch supporter of Israel Bolsonaro had vowed during the campaign to relocate the Brazilian embassy in Israel to Jerusalem, following in the footsteps of the US and Guatemala.

On Thursday, Bolsonaro announced via Twitter that he intended to uphold his campaign promise.

“As previously stated during our campaign, we intend to transfer the Brazilian Embassy from Tel-Aviv to Jerusalem. Israel is a sovereign state and we shall duly respect that.”

Earlier on Thursday, Bolsonaro spoke with Israel Hayom, emphasizing his support for the Jewish state and suggesting that he was inclined to move the Brazilian embassy.

“Israel is a sovereign state,” he said. “If you decide on your capital, we will go according to that. When I was asked during the campaign whether I would [move the embassy if I was elected], I said yes, and the one who decides on the capital of the state of Israel is you, not other nations.”

“Besides, Palestine first needs to be a state before it has the right to an embassy.”

“A moving announcment by the president of Brazil, my friend, Jair Bolsonaro, that he will move the Brazilian embassy to Jerusalem, our eternal capital. As I already said, President Bolsonaro is a wonderful friend of the Jewish people and the State of Israel. Thank you so much, Brazil!”