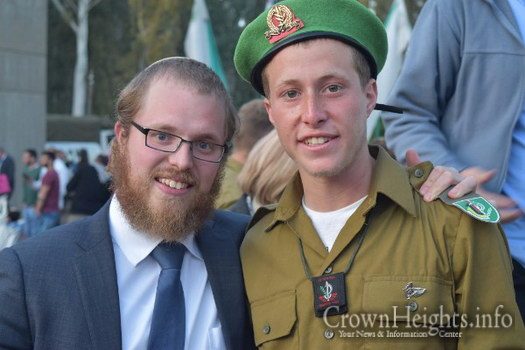 Daniel was 19 when he enlisted in the Israeli Defense Forces. Born and raised in Brooklyn, NY, Daniel felt stuck in a rut, and was looking for a way to break out by doing something drastic and meaningful, which is how he became a Lone Soldier – a foreign soldier in the IDF without a family or support structure in the Holy Land.

After joining the army, though he had been expecting tough training, things were far more difficult than he had envisioned. On breaks, the loneliness was acute – Shabbat meals were especially difficult. But when Daniel found Chayal el Chayal, he finally felt at home. He was placed at welcoming families for Shabbat meals. He was able to rest up at the Chayal el Chayal home in Jerusalem, where he found new friends to relax with.

But perhaps most importantly of all, at Chayal el Chayal, Daniel was listened to. Daniel built a meaningful relationship with a Chayal el Chayal rabbi, who was able to understand and appreciate Daniel’s challenges. Daniel was able to confide in someone who understood him, which led him to reconnecting to his Yiddishkeit in a more positive, personal way.

Daniel is not alone – there are some 6,000 Lone Soldiers serving in the IDF, and Chayal el Chayal aims to give each of them the material and spiritual support they need with places to stay, use a computer, do laundry, or speak to a counselor.

Now you have the opportunity to join this mission by purchasing a ticket in the Chayal el Chayal raffle with a grand trip of a trip for four to Israel with food, transport, accommodation, airfare and a visit to an IDF outpost.

There is only one week left to purchase a ticket, hurry and make sure you get yours today, so hundreds just like Daniel have a home away from home.