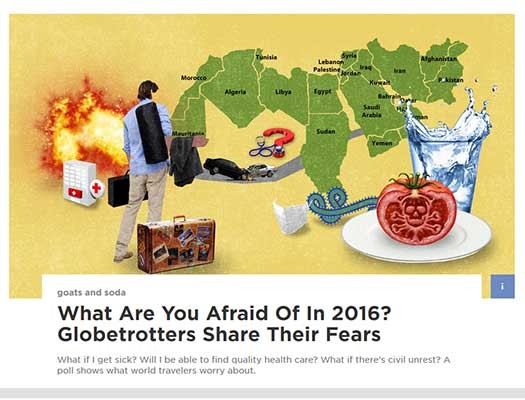 NPR Erases Israel From the Map

In a column on world travel, NPR featured data on concerns topping the lists of world travelers. Not surprisingly the Middle East and N. Africa topped the list of places perceived to be the biggest danger. This was equally scary for the State of Israel, which in a graphic illustrating the article, was ‘wiped off the map’ and replaced with ‘Palestine’.

The article, written by Marc Silver for the Goats and Soda column, is featured prominently on the NPR homepage and features the fictitious map.

Many commenters took issue with the graphic in, “I was in the Middle East in November and traveled to Israel and Jordan. I haven’t heard or read anything about Israel having been destroyed, although there is a large group of people hoping for and trying to make that a reality. Why doesn’t it appear on your map? Also, do you think ever Moslem country is dangerous?” wrote Judie Amsel.

Honest Reporting took a different look at it, “Perhaps NPR meant to produce a map that specifically highlights the Muslim world. If that is the case, then this should have made this clear as to why Israel is not included (as well as producing a more accurate term that could be used to describe the West Bank and Gaza / Palestinian Territories or the like).”