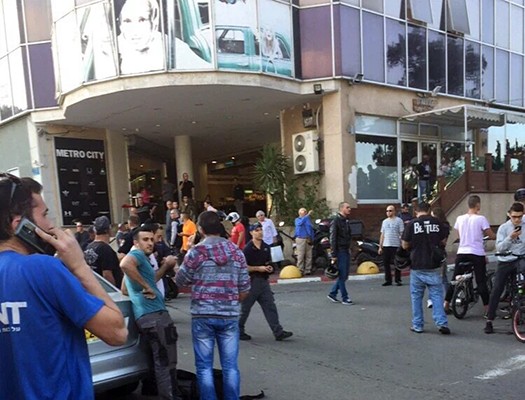 Two people have been killed and one other person was injured in a stabbing attack at a synagogue in south Tel Aviv during Mincha prayers.

The injured victim, a man in his 50s, is in moderate condition. He was treated at the scene by Magen David Adom paramedics before being evacuated to Ichilov hospital.

The Arab terrorist who carried out the attack was tackled and held by a civilian until police arrived to arrest him, and sustained light injuries in the course of being captured. He has been identified as a 36-year-old resident of Dura, close to Hevron, with no previous criminal record and who appears to have been in Tel Aviv legally.

The attack took place at a synagogue in the Panorama building along Ben Tzvi Street in southern Tel Aviv, as afternoon prayers were being conducted.

Security forces scrambled to the scene initially responded to reports of a possible second terrorist by conducting a sweep of the area, but have confirmed that at this point those claims appear to have been mistaken.

“The sight was difficult. At the entrance to one of the businesses in the building a 32-year-old man was lying (on the ground) unconscious, without a pulse and not breathing, after suffering from stab wounds to his upper body.

“Close to him lay a 30-year-old man with stab wounds to his upper body, and a floor below we located an additional casualty, a man of about 50, fully conscious.

“We quickly provided them with first aid at the scene and immediately evacuated them to Ichilov hospital.”

Deputy Defense Minister Rabbi Eli Ben-Dahan responded to the attack shortly afterwards, noting that it took place just a day after the first anniversary of the bloody terrorist attack at a Jerusalem synagogue which killed five people.

“Terror is terror, and it doesn’t matter where it occurs,” he continued, hinting at the recent terrorist attacks in Europe. In Israel’s case “its roots are the incitement from the Palestinian leadership which encourages (violence).

Only by continuing to act with a firm hand against terrorists and their supporters could Israel hope to combat the ongoing wave of terrorism, he added.

“Only destroying the homes of the terrorists swiftly after an attack and expelling their families will deter the next perpetrator.”

In Hevron, an Arab teen was arrested by soldiers close to the Cave of the Patriarchs, after he approached them with a concealed knife.

Earlier in Gush Etzion, just north of Hevron, three Arab women were detained after attempting to infiltrate an army base armed with knives.

No Israelis were injured in either of those incidents.