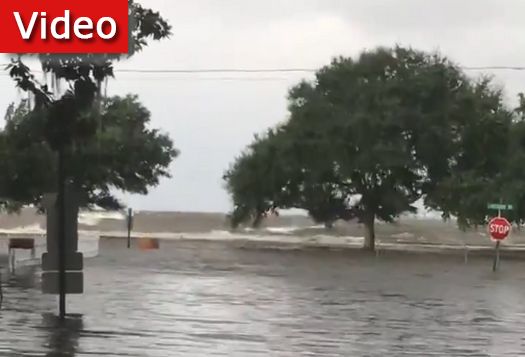 Hurricane Barry weakened Saturday to a tropical storm as it came ashore with sustained winds measuring 75 mph (120.7 km/hour) along the Louisiana coast west of New Orleans.

The winds quickly dropped to 70 mph (112.6 km/hour), bringing Barry down from a Category 1 hurricane to a tropical storm.

However, flooding caused by the storm is still “life-threatening,” the National Weather Service warned.

The storm could bring between 10-20 inches (25.4-50.8) of rain by Sunday evening, with some areas receiving up to 25 inches (63.5 cm), USA Today reported. According to NBC News, the storm is expected to turn north-northwest Saturday night, heading due north on Sunday, by which time it is expected to weaken to a tropical depression.

According to CBS News, the US Coast Guard rescued at least 12 people amid floodwaters in Louisiana, and 70,000 people are without power: 67,000 in Louisiana and 3,000 in Mississippi.

Power company Entergy Louisiana said in a tweet that as as soon as its safe its crew will assess the damage to begin restoring power, NBC News added. The site noted that Barry is currently moving slowly, at about 6 mph (9.7 km/hour).

“When you put that much rain down in areas around Baton Rouge and Mississippi, those rivers and creeks are filling quickly,” he said, emphasizing that residents should heed local authorities and stay off the roads when the flooding begins.