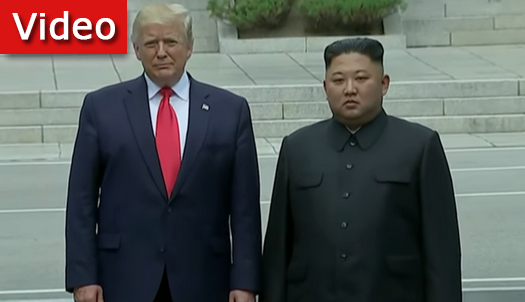 The meeting took place at the Korean border village of Panmunjom, on the southern side of the border.

South Korean President Moon said that Trump and Kim were “brave” for agreeing to meet. “I hope President Trump will go down in history as the president who achieves peace on Korean Peninsula.”

President Trump downplayed the significance of the meeting, saying that it would be “short” and “virtually a handshake, but that’s OK. A handshake means a lot.”

During the meeting, Trump reportedly invited Kim to the White House, CNN reported.

“I’m inviting you to the White House. From the first moment we liked each other,” said Trump of Kim, “it’s an honor for me. We came from the G-20 summit in Japan, and I wanted to meet with North Korean leader Kim Jong-un. We’ve come a long way.