« Weekly Story: The Rebbe Does Not Make A Mistake
Picture of the Day » 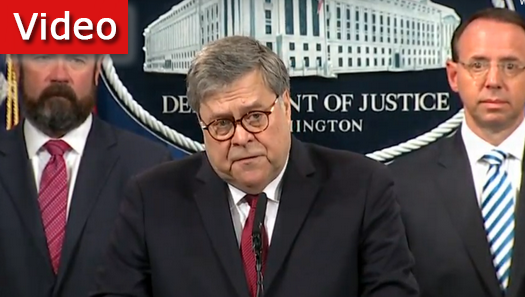 US Attorney General William Barr released a redacted version of the Mueller report on Russian interference in the 2016 presidential election Thursday morning.

Speaking at a press conference, Barr said that he would provide copies of the public version of the report to the ranking members of the Senate and House judiciary committees and that the report would be posted on the Department of Justice website.

He also said that he would provide a version of the report with all redactions except those related to grand jury testimony removed to a bipartisan group of leaders from several congressional committees.

Barr said that Special Council Robert Mueller told him and Deputy Attorney General Rod Rosenstein that he did not decline to make a conclusion on the charge of obstruction because of a department policy of not indicting a sitting president.

According to Barr, President Trump waived his executive privilege to prevent parts of the report from being released.

Last month, the attorney general released a four page summary of the Muller report’s conclusions that the was no evidence of collusion with the Russian government to sway the results of the 2016 election and refusing to make a recommendation on the charge of obstruction of justice.

« Weekly Story: The Rebbe Does Not Make A Mistake
Picture of the Day »