« Weekly Story: To Which Part Are You Part Of?
Weekly Living Torah Video: A Hakhel Special » 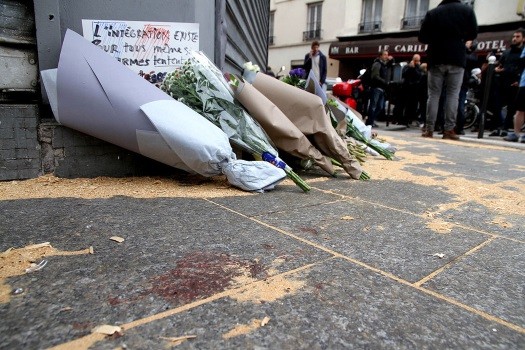 The Le Petit Cambodge restaurant with a makeshift memorial of flowers, the day after the attacks.

The ‎Islamic State claimed responsibility on Saturday for a coordinated assault by gunmen and bombers that killed 129 people at locations across Paris. President Francois Hollande said the attacks amounted to an act of war against France.

In the worst attack, a Paris city hall official said four gunmen systematically slaughtered at least 87 young people at a rock concert at the Bataclan concert hall before anti-terrorist commandos launched an assault on the building. Dozens of survivors were rescued, and bodies were still being recovered on Saturday morning.

Some 40 more people were killed in five other attacks in the Paris region, the official said, including an apparent double suicide bombing outside the Stade de France national stadium, where Hollande and the German foreign minister were watching a friendly soccer international.

The assaults came as France, a founding member of the U.S.-led coalition waging air strikes against Islamic State in Syria and Iraq, was on high alert for terrorist attacks.

It was the worst such attack in Europe since the Madrid train bombings of 2004, in which 191 died.

« Weekly Story: To Which Part Are You Part Of?
Weekly Living Torah Video: A Hakhel Special »