« When a Private Sukkah Costs $4 Million, Where Do We Eat?
Portion of House Facade “Blows Off” » 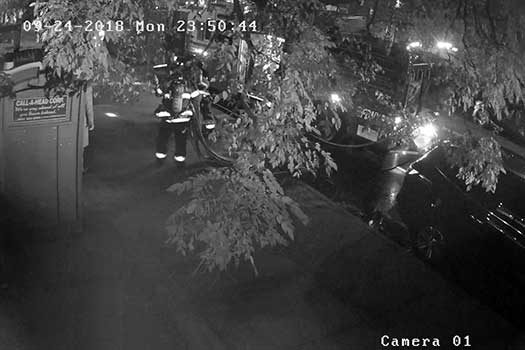 Still image from surveillance video showing firefighters arriving at the scene of the fire.

A fire, which broke out on the second night of Sukkos, forced the evacuation of an apartment building on East New York Avenue and displaced a family after an unattended candle on a porch caught fire and quickly spread.

At around midnight on the second night of Sukkos a fire broke out on the second floor of 633 East New York Avenue, just off Kingston Avenue, when an unattended candle on a porch caught fire and quickly spread across the entire floor.

“There were many people still in their Sukkas and out walking, so the fire was immediately noticed” one of the building residents told CrownHeights.info, adding “there was more than enough time to get everyone safely out of the building and alert the fire department.”

Of the four apartments on the floor just one was occupied.

It took firefighters around 30 minutes to gain control over the fire and put it out. B”H there were no reported injuries to residents or firefighters.

One family was displaced by the fire, which thankfully did not spread to the adjoining floors, and they were taken in by nearby relatives.

The remaining residents of the building were forced to clean up and deal with residual smoke damage and smell. “[Thank G-d] we were all ok and aside from the little bump our yom tov went on!” said a resident.

« When a Private Sukkah Costs $4 Million, Where Do We Eat?
Portion of House Facade “Blows Off” »