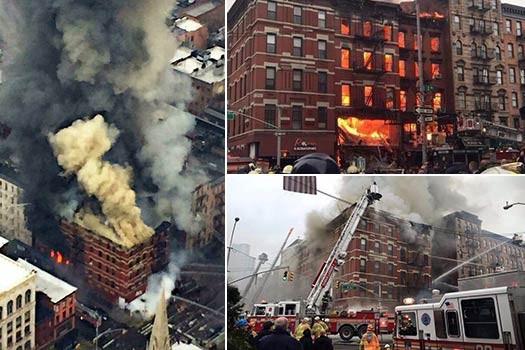 Four Manhattan buildings have been damaged and two have collapsed following an explosion, believed to be related to gas plumbing work being done on the premises, in the East Village. 12 people have been injured and 3 of them have been listed in critical condition.

The explosion was first called in to 911 at 3:17pm. Part of the facade of 121 2nd Avenue was blown off and debris littered the street in front. Although there was no smoke or fire initially, that quickly changed and the building went up in flames and spread to the adjoining 123 2nd Avenue.

At a press conference at the scene of the fire mayor Bill DeBlasio said that there was ongoing work being done on the premises of 121 or 123 2nd Avenue and it appears that the explosion may have been the result of an accident.

Mayor DeBlasio also confirmed that 12 people were injured as result of the explosion and three of them were listed in critical condition.

As the flames spread one of the buildings completely collapsed and fire operations are ongoing.