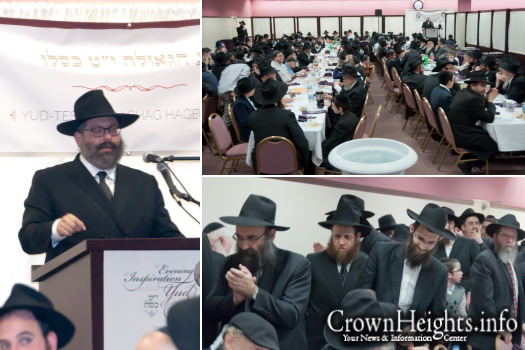 Over 400 people participated in Chicago’s annual Yud Tes Kislev Farbrengen, which was held on Thursday Night at The Bellows Center – FREE of Chicago.

The event was chaired by Rabbi Levi Notik of FREE, which hosted the Farbrengen

The guest speaker, Rabbi Yosef Yitzchok Jacobson, dean of TheYeshiva.net, addressed the crowd, and spoke of the many aspects of Yud Tes Kislev with Chassidic stories and insights and the practical implications for Chasidim today.

Greetings were given by Rabbi Shmuel Notik, Executive Director of FREE and leader of the Russian Jewish community and by Harav Baruch Hertz, Rabbi of Congregation Bnei Reuven and Chabad of Lakeview.

Rabbi Meir Moscowitz, Head Shliach in Illinois, addressed the guests, encouraging everyone to get involved in the many opportunities available for Mivtza Chanukah. Moscowitz also announced the plans for the upcoming community wide Siyumie Harambam.

During the course of the evening a Chalukas Hashas for the coming year was arranged by Reb Yoel Atkins.
After the formal portion of the evening concluded, many stayed on with Rabbi Jacobson, who enlightened the crowd with a Chassidisher Farbrengen until 6:00am.