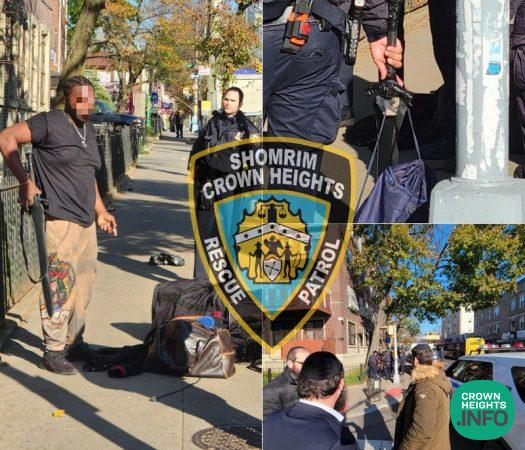 Man With Sword Given Care On Kingston Ave

A man holding a sheathed sword on Kingston Ave was given care Wednesday morning after an incident left him with injuries.

According to sources familiar with the incident, a concerned resident called Crown Heights Shomrim and 911 after noticing a man holding a large sheathed sword on Kingston Ave while bleeding from his forehead.

Within 40 seconds, the first Shomrim volunteer arrived on the scene, finding the man nonconfrontational and dazed. The Police arrived a minute later and the man complied with their order to put down the weapon.

The man had allegedly been injured in a altercation previously and needed medical attention.

Danger averted, the police helped the man with an ambulance to the hospital.

“We responded to a call for a male on Kingston Ave, carrying a sword & bleeding from his face,” Shomrim reported on Twitter. “We arrived quickly & kept the scene calm for @NYPD71Pct officers who arrived quickly, and efficiently took possession of the sword and got the subject medical attention.”