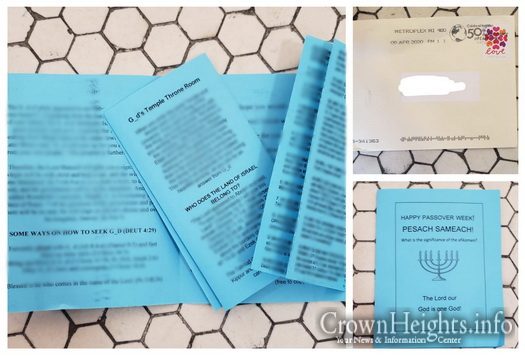 Crown Heights residents have again become the target of missionaries in Crown Heights. This time through the mail.

A resident noticed the material delivered to his door, and snapped some photos of what appeared to be an innocent looking letter.

Once opened, a group of blue colored leaflets were found inside appearing on the surface to be Jewish literature.

“Pesach Sameach! What is the significance of the afikomen? Who does the land of Israel belong to?”

These catchphrases along with Jewish icons disguise the missionary intent, while the writing inside looks to bring Jewish people to Shmad.

Please be vigilant and dispose of all such materials.