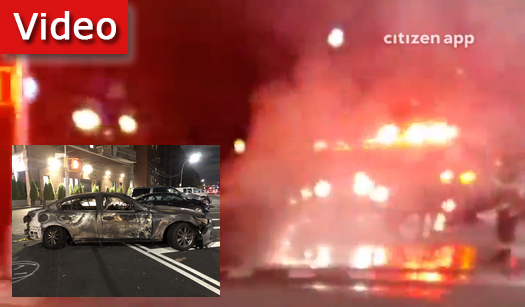 Late Friday night, an explosion rocked the corner of Lefferts Ave and Troy Ave in Crown Heights, shaking buildings more than a block away.

The cause of the explosion was a manhole located directly in front 706 Lefferts Ave, located on the corner.

“What a boom,” a homeowner who lives just feet away from the explosion said, “the block shook.”

The only victim of the explosion was a car parked directly above of the manhole. The car quickly caught fire, becoming a fireball that melted and warped the vehicle.

A local resident who went out to investigate the explosion told CrownHeights.info that he ran out of his home, and arrived to hear popping noises coming from under the burning car. The car, already on fire, suddenly became a fireball as the engine block joined the inferno.

Firefighters responded to the explosion and car fire. They quickly dowsed the flames, and no one was injured in the incident.