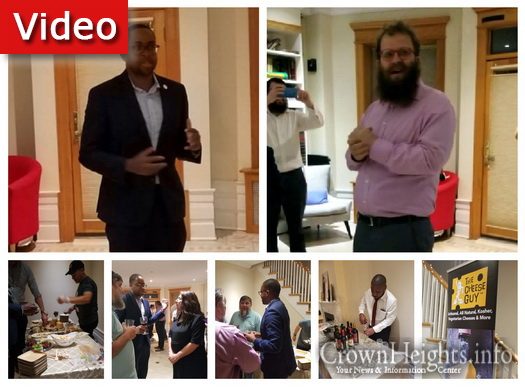 A special meet and and greet was held in Crown Heights Wednesday evening, with the Honorable State Senator Zellnor Myrie.

The event was opened by Rabbi Yaacov Behrman, who hosted the event at his home in Crown Heights. Rabbi Behrman highlighted the importance of cooperation between the local community and their representatives in Albany. He spoke about the diversity found in the Crown Heights community, and the unity on Israel and the autonomy of Yeshivos.

Rabbi Mendy Margolin, one of the organizers of the event, gave an invocation and blessing for the Senator and the community.

Senator Myrie spoke about the shared responsibility of the wider Crown Heights community and its leaders to take a stance against gun violence, and remain unified despite its wide range of cultures. He also noted the need of affordable housing and healthcare for the residents of Crown Heights.

The event included a Wine bar, assorted Artisan Cheese by The Cheese Guy, and smoked fish from Benz’s.

A special thanks to the members of the invite committee, including Yankee Pearson, and Mendy Weisz.